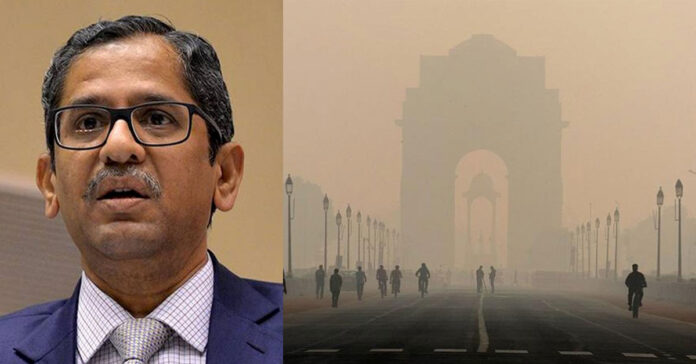 The Supreme Court pulled up the Centre and the State government while hearing a plea filed by a 17-year old Delhi student, Aditya Dubey who expressed his concern regarding rising levels of air pollution in Delhi.

The Supreme Court told the central government to chalk out an emergency plan over long-term measures. Chief Justice NV Ramana said “You see how bad the situation is… even in our houses, we are wearing masks.”

Solicitor General Tushar Mehta argued, “Everyone is fighting their own battle-state, Centre agencies. We have filed short summary of steps taken by everyone.”

He also claimed that five steps have been taken, while talking about the problem of stubble burning.

In addition to this, Tushar Mehta said that the farmers have been burning stubble from Punjab in the last few days.

Responding to this, CJI Ramana said, “You are projecting as if farmers alone are responsible. But that is 40 percent. Where are the steps to ensure Delhi people are controlled? What about firecrackers? Vehicle pollution?”

Justice Chandrachud rebuked the governments and expressed concern about children being exposed to pollution as schools reopen in the city. He said” You’ve opened up all schools. You’re now witnessing all kids going to school and exposing their lungs to the pollution. Have you responded to the situation? This is under power of the Delhi government.”

The Supreme Court emphasized that the issue is “not about state or party government.” It’s everyone’s problem. We want the pollution levels to come down,” the CJI added.
He further said, “We are saying first control Delhi, and then we will see other people also. Call a meeting of other states also, impose some serious steps. In the next few days we want to feel better”.

The Supreme Court has suggest that all concerned states and the Centre need to conduct emergency meetings on steps to reduce pollution in Delhi.

Previous articleCBSE announces Special Board Exams for Classes 10 and 12
Next articleWoman punished for eloping with lover, Head tonsured, face blackened