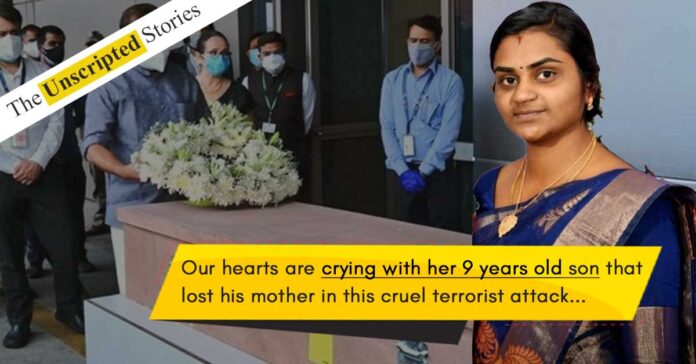 The mortal remains of the Kerala woman killed in the Hamas attack in the city of Ashkelon in Israel was reached to India.

Mortal remains of 30 year old Soumya Santosh, who died in the Palestinian attack is sent to India. The jet carrying her body started from Ben-Gurion airport at 7PM on Friday and reached India on Saturday morning. The Indian embassy tweeted the same.

Soumya, worked as a care giver in Southern Israel  to a 80 year old woman. She hailed from Idduki district of Kerala. She was working for the last 7 years.

Unfortunately, a rocket struck her house, while she was talking to her husband over a video call. However, the 80 year old woman survived the rocket attack.

ALSO READ: Israel Attack on Palestine: At least 40 killed including one Indian Woman

Due to a technical glitch the Iron dome could not counter the rocket which hit the building in which Soumya was residing. Israel government condoled her death.

Israel’s Ambassador to India, Ron Malka, condoled the death of the Indian woman through twitter on Wednesday. “On behalf of the state of Israel, “I convey heartfelt condolences to the family of Ms. Soumya Santosh murdered by Hamas indiscriminate terror attack on innocent lives. Our hearts are crying with her 9 years old son that lost his mother in this cruel terrorist attack’ he said.

Soumya Santosh is survived by husband and 9 year old son.