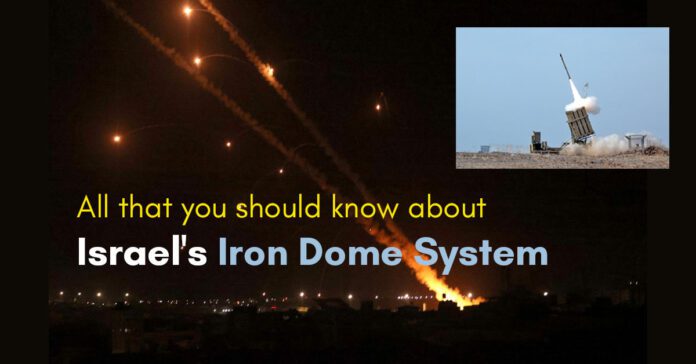 RAW FOOTAGE: This is the moment the Iron Dome intercepted a barrage of rockets over Tel Aviv and central Israel. pic.twitter.com/8jl8OTgWCl

Due to this Iron dome system, the casualties are limited to single digits, that also in the worst cases. During the recent Israel-Palestinian conflict, the explosions in the sky are accompanied by sirens on the streets.

What is Iron Dome System?

However, Iron Dome system is a short range air defense system. It is particularly designed to intercept rockets, artillery and mortars. Israel is using this system since 2011. This defense system is the reason for less casualties from rockets fired on Israeli cities.

The air defense system was developed by Israel defense firms – Rafael defense firms and Israel Aerospace Industries. The US supported Israel technically and financially to build this system.

Iron dome system counters medium and long – range threats with interceptors. During the recent Israel-Palestinian conflicts, the Iron Dome was on work and intercepted all the rockets fired by the terrorists from the Gaza strip.

Apple and Amazon are once again running advertising on Twitter. Elon Musk independently verified that Apple has resumed...
Entertainment

Superstar Shah Rukh Khan is currently attending the Red Sea Film Festival. He has been grabbing the...
International

Former US president Donald Trump announced his bid for the 2024 US Presidential Election on Wednesday. He...
Load more