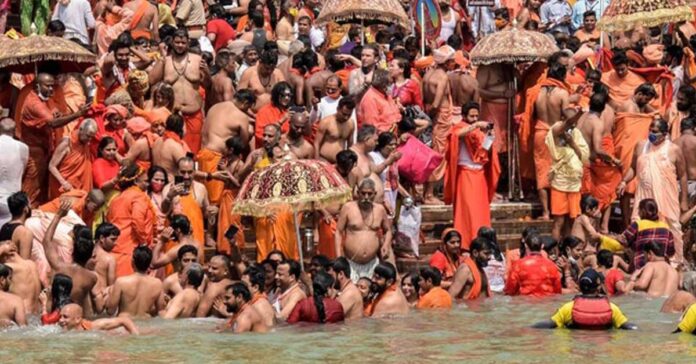 In a recent development, The Haridwar district administration ordered an investigation. It alleged that fake COVID-19 test reports were issued by private laboratories tasked to conduct tests during the Kumbh Mela.

The Kumbh Mela, is one of the world’s largest religious gatherings. It was held from April 1 to April 30. Lakhs of devotees gathered despite the corona virus pandemic.

Reports show that there were several irregularities while reporting the number of COVID-19 cases. A single phone registered over 50 people. Moreover, one antigen test kit tested 700 samples.

Uttarakhand government engaged a private agency to conduct COVID-19 tests during the Kumbh Mela. It is learnt, in a detailed probe that the agency issued at least 1 lakh fake reports.

The investigation conducted by a committee headed by Chief Development Officer Saurabh Gaharwar found several irregularities in the test reports. The report said that a single phone number was used to register over 50 people and one antigen test kit was used to test 700 samples.

The 200 sample collectors hired by the agency tuned out to be students and data entry operators or residents of Rajasthan. These people had never been to Haridwar. However, these sample collectors should be physically present to collect samples.

The investigation revealed that many private labs roped in by the district health department issued fake COVID test reports. Above all, the names of random people on the basis of their identity cards and phone numbers were issued.

Apparently, the labs issued fake reports to meet the daily testing quota of 50,000 tests set by the Uttarakhand High Court during the Kumbh mela.

Due to the discrepancies in the testing process, the government has stopped all the payments to all the hired labs due to the ongoing investigation.

ALSO READ: Haridwar Kumbh Mela to be held with limited people, devotees to get entry passes