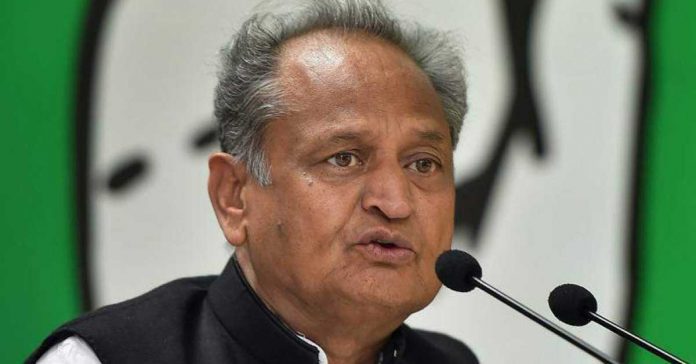 Rajasthan Chief minister Ashok Gehlot on Saturday alleged that the opposition Bharatiya Janata Party (BJP) has tried to buy legislators “like goats in a marketplace” but the Congress has let down its shameless attempt to topple the government.

The special operation group (SOG) of the Rajasthan police has already booked two men for trying to topple the government by offering bribes to congress legislators. These arrested men had direct links with the BJP.

An FIR was lodged on these two men based on mobile conservation between the arrested men who were making attempts to topple the government on Friday, was being made since before the Rajya Sabha polls held on June 19

“BJP leaders tried to topple the Rajasthan government at a time when the entire administration was busy in tackling the coronavirus outbreak. When all of us should have been focused in fighting the virus, the ministers, legislators and leaders had to divert attention to saving the government,” Gehlot said, while addressing a virtual press conference on Saturday.

Rajasthan did not have a tradition of horse trading but the BJP leaders have become brazen and were promising Rs 10-15 crore to MLAs to switch allegiances and destabilize the congress government, said Gehlot.

“The BJP leaders have crossed limits of shamelessness. The BJP is trying to do politics by trying to buy MLAs like goats from a market,” he said.

“But we thwarted their similar game plan in Rajasthan and won two seats and taught them a lesson. But, they are shameless and are still trying their machinations,” he said, that there was no threat to his government and assured that his government would complete its full term.

“Mod ii and Amit Shah ji cannot tolerate me or my government. The conspiracy is being carried out by BJP leaders in the state who are trying to buy legislators,” he said.

Gehlot asserted that the BJP was different when Atal Behari Vajpayee was prime minister between 1998 and 2004. “During (Atal Bihari) Vajpayee’s time, this was not the case but since 2014 the arrogance in the BJP has come out in the open. They are dividing people on religious and caste lines and murdering democracy. Their (BJP’s) thinking is fascist,” he said.

BJP leaders, however, said the chief minister and Congress had laid out the entire game plan of accusing BJP of horse trading ahead of the Rajya Sabha elections to hide its own internal divide.

Rajasthan BJP president Satish Poonia said, “This is Congress’s own fight. The entire strategy was worked out by the chief minister to prevent factionalism from coming out in the open.”

“In the press conference, the CM did not name any betrayer who could switch sides. He was only trying to hide the divide and friction within the Congress party and is using BJP as a scapegoat which is not justified.”

Poonia said Gehlot had crossed limits of political decency by using derogatory words for the legislators and BJP central leaders.

“He termed the MLAs as goats and referred to BJP leaders in the state and Centre as shameless. This has never happened in Rajasthan politics,” Poonia said in a virtual press conference. Poonia said Gehlot was trying to emerge as a national leader by attacking Modi and Shah.

The BJP president also refuted Gehlot’s charge that the BJP was a divided into several groups in Rajasthan and the state unit has not been able to form its executive because of differences between group led by leaders such as Satish Poonia, former chief minister, Vasundhara Raje and leader of opposition in Rajasthan assembly, Gulab Chand Kataria.

Ashok Gehlot, the Rajasthan Chief Minister has called a state cabinet meeting at 9:30 pm tonite to...