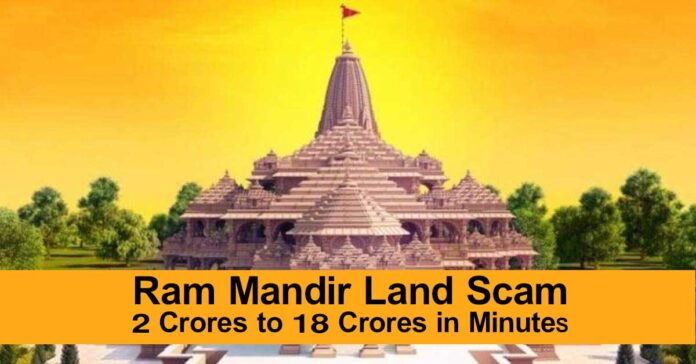 Ram Mandir Land Scam: The Samajwadi Party (SP) and the Aam Aadmi Party(AAP) leaders alleged that Ram Bhakts are deceived at the behest of the Ram Mandir.

The two opposition parties alleged that land worth Rs.2 Crore was purchased at Rs.18.5 crore by the Sri Ram Janmabhoomi Teerth Kshetra Trust in Ayodhya.

SP and AAP levelled charges of corruption in land purchase by the Trust. Both the parties held separate press conferences. They said that the land value was estimated at Rs.2 Crore during registering the land.

However, an additional payment of Rs.16.5 crore was made to the seller just five minutes later.

The opposition leaders claimed that the transactions were carried on by Champat Rai, General Secretary of the Ram Temple Trust.

Furthermore, he added that Trust member Anil Mishra and Ayodhya Mayor Rishikesh Upadhyay were witnesses to the registry.

In addition to the allegations, Sanjay Singh demanded an inquiry into the matter. He asked an inquiry by the Central Bureau of Investigation (CBI) and the Enforcement Directorate ( ED).

However, Mr. Champat Rai refuted these allegations and said that they were “influenced by politics and misguided”

Moreover, he said that it was important to acquire some properties adjacent to the East and West side of the Ram Temple complex ‘to create easy access for pilgrims’

But, Mr. Champat Rai did not explain how the difference between the two transactions, carried out within minutes, was a staggering Rs.16.5 crore.

What was the dispute between Mahant Narendra Giri and Anand Giri?

In Mahant Narendra Giri in his suicide note mentioned his disciple, Anand Giri as the cause for...
News

Ayodhya’s Temporary Ram Mandir To Reopen, Most Mathura Temples To Be Shut

This new place of worship would be opened for devotees starting this morning with all social distancing...