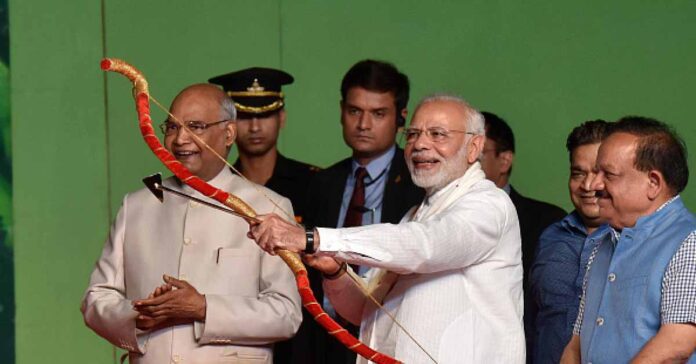 Secretary General of the Vishwa Hindu Parishad (VHP) Milind Parande,on Friday, said that VHP has started a campaign for Fund Collection For Building Ayodhya Ram Mandir. The campaign for collection for Ram Mandir will begin on 14 January. This campaign will start with contributions from President Ramnath Kovind and Prime Minister Narendra Modi.

This year, Makar Sankranti festival will be celebrated on 14 January in a different way. The campaign will start on this auspicious day. “We will begin with the Rashtrapatiji (president), then Pradhan Mantriji (prime minister), chief ministers of all states, actors, authors, poets…and such celebrities. Whoever wants to contribute is open to, but we are clear that we don’t want this to be a temple by donation of not one donor. Everyone has to be a sahbhagi (partner), in its building,” Parande said.

This donation campaign will be the biggest outreach to collect funds for the construction of Ram Mandir. This is being planned by Hindu religious and other nationalist organizations.

The Rashtriya Swayamsevak Sangh (RSS) has planned to collect funds for Ram Temple in Ayodhya by reaching out to 5 lakh villages and ten crore families.

A fundraising campaign will be conducted from 14 January to 27 February by the Ram Janmabhoomi Teerth Kshetra Trust, the body responsible for building Ram Temple.

The Ram Janmabhoomi Teerth Kshetra Trust plans to involve 55 crore family members of 12 crore Hindu families. It has planned to reach out to more than five lakh villages in this initiative.

The estimated cost for the construction of the grand temple of Lord Ram at the ancient city of Ayodhya is around Rs 1,100 crore. The building of the main temple structure is estimated to cost around Rs 300-400 crores,

What was the dispute between Mahant Narendra Giri and Anand Giri?

In Mahant Narendra Giri in his suicide note mentioned his disciple, Anand Giri as the cause for...
News