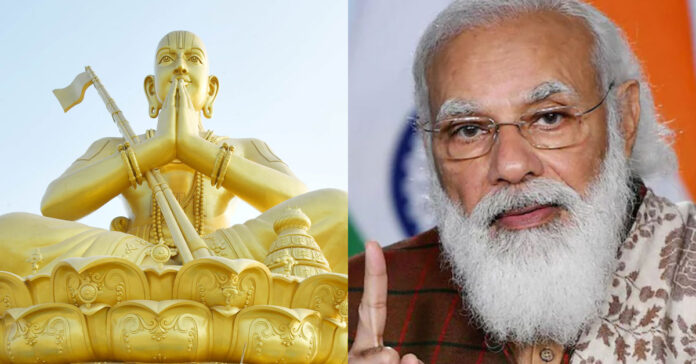 Prime Minister Narendra Modi will visit Hyderabad on Saturday. Firstly, he will participate in the 50th Anniversary celebrations of International Crops Research Institute for the Semi-Arid Tropics (ICRISAT). Thereafter, dedicate the ‘Statue of Equality’ to the nation. This is at Munichintal near Shamshabad.

The Prime Minister will kick-start the 50th anniversary celebrations at the ICRISAT campus in Patancheru at around 2.45 PM. Later at 5.00 PM, he will dedicate the ‘Statue of Equality’ to the nation.

The ‘Statue of Equality’ is 216- feet tall. It commemorates the 11th century Bhakti Saint Sri Ramanajacharya. Ramanujacharya promoted the idea of equality in all aspects of living including faith, caste and creed. This statue is made of ‘Panchaloha’- a combination of five metals. It is one among the tallest metallic statues in sitting position in the world.

Hyderabad City Police Commissioner CV Anand, in a press meet said that all the accused involved in...
Foreign Affairs

BJP that should Apologise; not India as a Nation, KTR tweets to PM Modi

KT Rama Rao, popularly known as KTR, questioned why India as a country should apologise for the...
Governance

Hate speeches in India have increased after 2014. BJP is trying to control the damage but it...
Crime

A 17 years minor girl was allegedly gang raped in a moving car by a group of...
News

The chairman of Narayana educational institutions and former minister, Ponguru Narayana was arrested in Hyderabad on Tuesday...
News

Hyderabad Honour Killing: Why did no one come to help, asks Victim’s Wife

Hyderabad Honour killing: Billipuram Nagaraju, a Dalit man was a victim of honor killing. He was killed...
Crime

A 26-year-old Dalit man, Billipuram Nagaraju, was brutally beaten and stabbed to death on a busy road...
Judiciary

While granting bail to Jignesh Mevani, the Barpeta court in Assam requested the High court to take...
Load more