Is Rhea Chakraborty in a relationship with Mahesh Bhatt or lacks common sense? 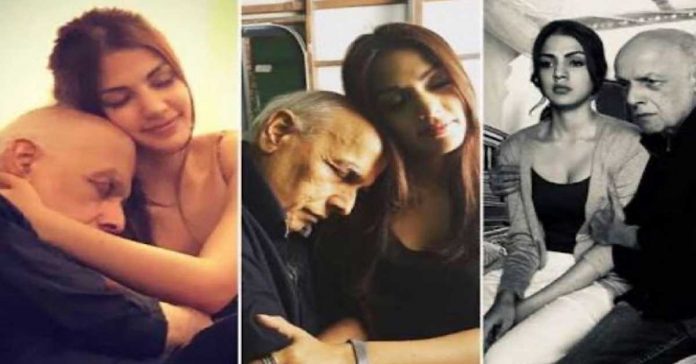 I was watching few videos on Instagram, I came across a short video, which disturbed me a lot. In the video, Mahesh Bhatt was holding Rhea Chakraborty in an awkward manner and even she was holding him back. And he keeps on pressing her very evidently. Rhea seems to be okay with everything.

It can be two things, either she is not taught about good and bad touch or she doesn’t know the difference between good and bad behaviour.

Surprisingly, Bhatt says, he puts forth that Rhea is like a child to him and he cares nothing if the audience can’t understand his neutral relation with her. Throughout the video, Rhea keeps nodding in approval of the same.

I don’t think this is how a guardian or an elder person presses someone he considers child-like or any other normal relation if it is a neutral relation, then again there can be two things here, either both of them are fooling the others or there’s a need for them to think again.

Rhea was a lead actor in Mukesh Bhatt directed movie Jalebi in 2018. Mahesh Bhatt, was the one who offered Sadak 2 in the first place to Sushant. Sushant humbly rejected the script of Sadak 2, a movie that was supposed to be a comeback as a director for Mahesh Bhatt after 20 years.

Many pictures involving them are questionable in nature and raise suspicion on the nature of their relationship. Looking at Bhatt’s personal life, his past relations, types of movies he makes, and his media image, one cannot deny the fact that Mahesh Bhatt is a person of questionable character.

This controversial Bollywood filmmaker Mahesh Bhatt, made news in the 80’s when he locked lips with his daughter Pooja Bhatt. He had also made a shocking statement that had she not been his daughter, he would have loved to marry her.

I feel that celebrities who still maintain cordial relations with these kind of people lack common sense.

Social activist Yogita Bhayana had filed a complaint against a company's promoter for allegedly blackmailing and sexually...
Columns

Why, Who, How? These are the only questions which people have been asking regarding ‘Sushant Rajput’s’ death....