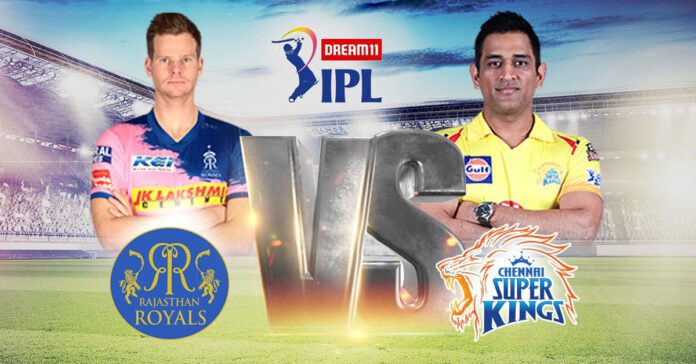 IPL 2020: Cricket lovers are enjoying the Dream 11 Indian Premier League. The three games played till now have entertained the sports lovers, and it is the time for the fourth one today.

So far, both the teams played head-to-head in 21 matches. Chennai Super Kings won 14 games, and Rajasthan Royals won 7 matches. Chennai has won almost double the matches than that of Rajasthan. Chennai Super Kings will be playing with confidence as they already have a win to their kitty. Rajasthan Royals might be on the receiving end of the pressure, but we have to see how they perform.

Steve Smith leads Rajasthan Royals. He recently recovered from the injury, and we have to see if he is back to form. Unfortunately, Jos Buttler will not be available as he is yet to finish his quarantine period. Regular players Robin Uthappa, Sanju Samson, Riyan, and David Miller, are crucial for the team. Jofra Archer, Tom Curran, Shreyas Gopal, and Yashasvi Jaiswal are vital bowlers for the team.

Chennai Super Kings might not change their team for their next game in this Dream 11 Indian Premier League. They might get Imran Tahir in the place of Ngidi.

The match takes place at Sharjah Cricket Stadium. As the stadium is small, we can expect a high scoring game. The game begins at 7.30 PM IST.

Sushmita Sen, the former Miss Universe, gave a clarification about the post made by Lalit Modi on...
Awareness

A group of unemployed youth from the Molipur village, Gujarat started a setup of fake IPL.  They...
Columns

IPL 2020: Should Virat Kohli be accountable for the RCB loss?