The tunnel, had been newly dug and appeared to have been used for the first time by the four Jaish terrorists suicide attackers.

A 200-metre-long and almost 8-metre-deep professionally engineered underground tunnel on the international border was discovered on Sunday. According to the Border Security Force (BSF), there is clear evidence that the four Jaish-e-Mohammed (JeM) terrorists had indeed travelled to Jammu and Kashmir from Pakistan. However, they were killed in the November 19 Nagrota encounter.

The location of the tunnel, with a diameter of 12-14 inches at the Indian end, was nearly 160 metres long from the international border and estimated to be around 40 metres long on the Pakistani side. The tunnel, according to top security officials, had been newly dug and appeared to have been used for the first time by the four Jaish suicide attackers.

A senior counter terrorism official said that it was evident that proper engineering effort has gone into construction of the tunnel and the hand of the establishment is quite evident.

The terrorists used a Taiwan-made, hand-held eTrex 20X Garmin global positioning system (GPS) device. This device carried by the terrorists helped them to track the exact route the jihadists followed after entering India through the tunnel and boarding a truck 12 kilometers away from the border.

Though the terrorists, tried their best to destroy the device before getting killed by the security forces. Indian security agencies and the BSF were able to recover data from the GPS device.

While the location of the tunnel exit in India is at latitude 32. 45648 N and longitude 75.121815 E, the entry point in Pakistan is near three Ranger outposts called Chak Bura, Rajab Sahid and Asif Sahid. The tunnel was detected by a team of seven BSF personnel led by Deepak Rana of 48 batallion who conducted search between 5.40 am and 7.50 am on Sunday morning. 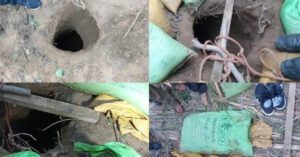 The entrance of the underground tunnel was difficult to locate. The mouth of the tunnel had been carefully concealed and meticulously covered with soil and wild growth with Pakistani Engro Urea Fertilizer sand bags used to strengthen and reinforce the infiltration route for the Jaish terrorists.

Data collected from the GPS indicates that the terrorists entered India just next to the 189 boundary pillar and close to BSF border outpost Regal, which is located near pillar 193. The first way-point on the GPS is nearly a kilometer from the border. The terrorists then walked approximately 12 kilometers to national highway number 44 after bypassing an Army camp and a railway track, and boarded the truck around midnight on November 19.

Security agencies have been able to plot the exact route with all the way-points to Jatwal village next to the highway. The truck then took them towards Nagrota where the four were gunned down in an intelligence-led operation. Repeated attempts to capture one of the terrorists came to naught as the Jaish killers had been commando-trained.

While intelligence agencies are now trying to decipher the recovered mobiles from the terrorists, security agencies have now foolproof evidence to nail Pakistan and the handlers of the Jaish attackers. India will also lodge a strong protest with Pakistani Rangers, who allowed the infiltration under their watch.

Although the Financial Action Task Force (FATF) is expected to give relief to Pakistan by removing it from the Grey List in February 2021, the evidence collected by India clearly shows that Islamabad continues to sponsor terror against India with its deep state harboring proscribed groups such as the JeM, whose entire leadership is based in Bahawalpur.

The terror group, Taliban were in control of the Afghanistan on Monday, as President Ashraf Ghani fled...
News

Was the attack on Mr. Nadda planned by the BJP?

Mr. J.P. Nadda is the President of the ruling party, the Bhartiya Janta Party. It is not...
International

Teenage Afghan shoots down Taliban terrorists, minutes after watching her parents get killed

The social media has praised Gul and called her a “hero” along with a photograph of hers...