In her speech, the 9-year-old said, “The freedom we enjoy today is the result of the sacrifices of Gandhiji, Nehru, Bhagat Singh, and innumerable other noble souls and revolutionaries." 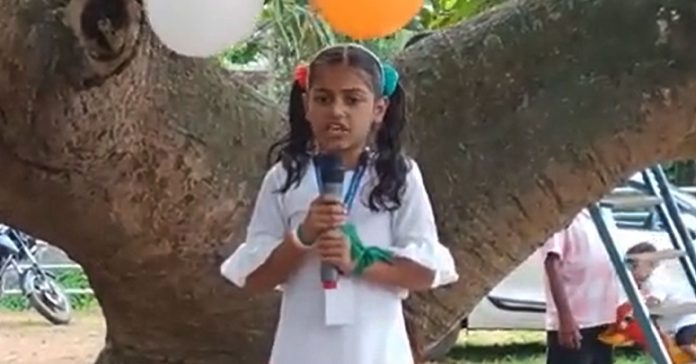 The nine -year- old daughter of jailed activist Siddique Kappan, Mehnaz Kappan has called for unity. On the occasion of Independence Day, Mehnaaz Kappan delivered a speech in her school in Kerala.

She started her speech, I am Mehnaz Kappan, daughter of Siddique Kappan, a journalist who has been put behind bars and denied all rights allowed to a citizen.” Mehnaaz is the youngest of Kappan’s three children. She studies in class IV.

Mehnaaz said, “On this day when the great Indian nation has entered the 76th year of Independence, let me say as a proud Indian, ‘Bharat Mata ki jai. She emphasised that the freedom every Indian is enjoying today is because of the sacrifices made by many freedom fighters.

In her speech, the 9-year-old said, “The freedom we enjoy today is the result of the sacrifices of Gandhiji, Nehru, Bhagat Singh and innumerable other noble souls and revolutionaries. Today, everyone can choose what to speak, what to eat, what religion to follow. There is freedom of expression,”

Furthermore she said ,“Every Indian has the right to oppose anyone who tells them to get out of the country,”

The dignity of the great Indian nation must not be surrendered before anyone. But even today, smokes of unrest can be seen, the consequence of which is the attacks in the name of religion, colour and politics. These should be uprooted by remaining united.

We should wipe out even the reflection of any unrest. We should live together and take India to greater heights, and dream of a better tomorrow minus all conflicts.”

Siddique Kappan was arrested under the anti-terror law UAPA, while he was on his way to cover the rape and murder of a Dalit teen in Hathras, Uttar Pradesh. He is accused of trying to incite social unrest. Kappan is in jail since then.