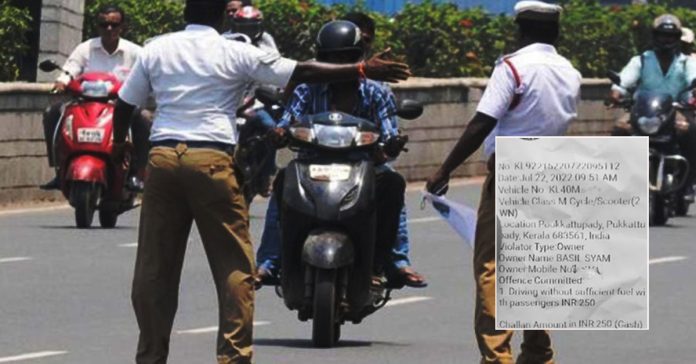 Basil Syam was riding his Royal Enfield motorcycle, when he was stopped by a traffic cop. According to spuzz.com, the man was riding his bike when the challan was issued. However, the image of the traffic police e-challan mentioned that Basil was supposed to pay Rs.250 for driving without sufficient fuel in his bike.

Mostly, two-wheeler riders get fined for breaking the rules or not wearing a helmet. But Basil was fined for driving without sufficient fuel in his bike. It sounds ridiculous, but the image of the challan is making rounds on the social media.

A portal, which covers news about automobile sector, BikeDekho, tried to reach Mr. Basil to comment. Mr. Basil said that he was on his way to his workplace when a local traffic policeman stopped him for driving on the opposite direction on a one-way road.

Consequently, he was asked to pay a fine of Rs.250 for which he obliged. However, after reaching office, when he looked into the challan and found the reason for the challan, it was ‘Driving without insufficient fuel with passengers’.

ALSO READ: Over 1.61 lakh Indians gave up their citizenship, know why?