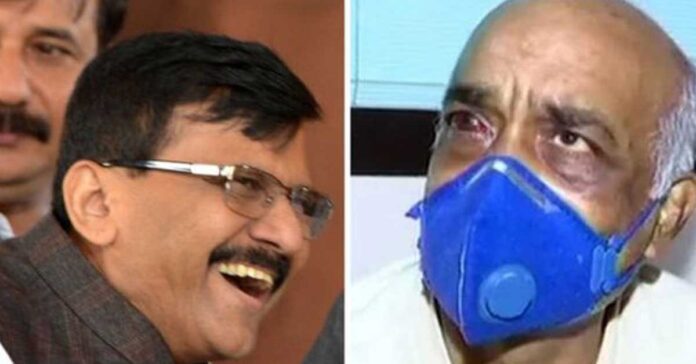 Shiv Sena MP Sanjay Raut justifies the attack by Shiv Sena workers as a spontaneous outburst of anger and said that anyone would react the same way as he felt that the cartoon shared by the navy veteran “derogatory” .

The Shiv Sena bent so low by justifying the attack on a retired Indian Navy officer by six Shivsainiks. He called it a calling it a “spontaneous” and “angry” reaction. He said that the reaction was after the veteran shared a “derogatory” cartoon on Chief Minister Uddhav Thackeray.

Raut said that the Navy veteran, Madan Sharma had circulated a cartoon of CM which was derogatory in nature which angered the Shiv sainiks.

Shiv Sena’s Chief Spokesperson Sanjay Raut issued a statement in which he said that there’s a rule of law in Maharashtra. No one who takes the law into their hands will be spared. He proudly said that this is the policy of Uddhav Thackeray.

Self- Control should be observed by both sides

Raut said that the eaction of the saffron party as “unfortunate” and alleged that saying it is “politicizing the issue”.

Raut said that everyone is equally responsible and both the sides have to follow some self discipline. People can not alk whatever they can just because of Freedom of Expression and use it for unwarranted, extreme criticism of Constitutional posts like that of the Prime Minister, President, Governor or a Chief Minister.

He further added that all the people need to act responsibly and be respectful of each other’s feeling. He also sermonized that it is the duty of the opposition as well as those in power to ensure that peace is maintained in society.

Raut came up with this justification after former Maharashtra Chief Minister Devendra Fadnavis termed the attack on a veteran an act of “state-sponsored terrorism”.

The retired officer said that Uddhav Thackeray should quit his post if he was unable to uphold law and order in the state.

In the meantime, the six accused were granted bail on Saturday. Then the BJP launched a protest accusing the Mumbai Police of imposing bailable sections.