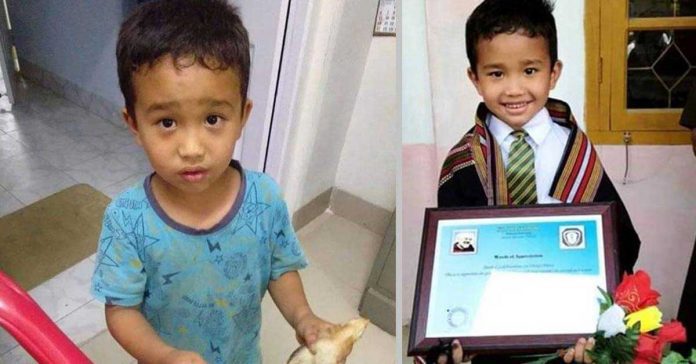 Humanity is not something which should be taught, it comes from within.

A 6-year-old small boy called Derek C Lalchhanhima from Mizoram had become viral with many likes shares and comments on the internet not because he is cute or posing well, but just for his deeds of humanity.This pure soul’s kind gesture has become viral.

A chick had come under his bicycle and died but he took it to the hospital. Now it comes to show why children are equal to God because irrespective of their native nor size, etc they show care and love, which hardly anybody does nowadays.

This innocent soul had taken the poor dead chick for treatment with ten rupees note to a hospital.

Many people should learn and practice such a kind gesture towards an animal, instead of hurting them or caging them. He returned to the hospital with another hundred rupees note.

It shows that he already learnt that money can do anything, he is so innocent that he didn’t know money can’t buy everything.

His school has recognized his kind gesture and awarded him with a shawl and certificate. It’s not just a piece of cloth or paper, those are the pillars of positivity and helping nature for his foreseeing future. This is a simple example of a quote which says “Pictures speaks a lot”.

This single picture which went viral taught us how selfish one has become in the race of life. Everyone does something for some advantage. But doing something without expecting anything is the greatest deed. Humans are the smartest living beings, yes but gradually we are becoming dumb at heart.

Education doesn’t teach everything, the very crucial and important things like ethics, gestures, good heart, helping nature all these are taught by the world around you. This is why our great scholars said charity begins at home. I would rather say everything begins at home love, care, joy, helping each other and all other qualities.

The way you want to see your kids in the near future depends on things which you do in your day to day life before your children matters a lot.

Stop asking them for marks and grades ask them for kind gestures and good deeds, which will make our family, community, state our country a better place to live in.

ALSO READ: 8 Important things every Parent should teach their son(s)

Bengaluru: In a surprise school bag checks, Condoms, cigarettes, contraceptives and alcohol were found in the bags...
Press Releases

The first-ever cafe where Neera will be served is inaugurated with in 10 days by Chief Minister...
Press Releases

Cyber attacks on healthcare facilities have been rising in recent years, and the pandemic has only worsened...
Entertainment