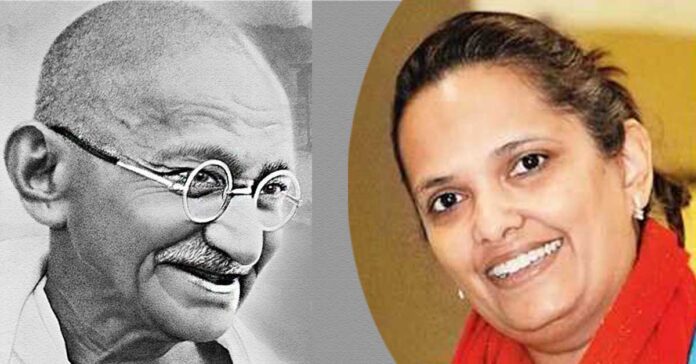 Mahatma Gandhi’s great granddaughter, Ashish Lata Ramgobin, was found guilty by the court. The accusation is about a six-million rand fraud and forgery case.

Ashish Lata is 56 years old. She is sentenced to seven years in jail by a Durban Court.

Ms. Ramgobin was accused of defrauding a businessman SR Maharaj. He advanced Rs.6.2 million to her. The amount was given to her to clear import and customs duties for a non-existent consignment from India. Moreover, he was promised a share of profits.

Ashish Lata is the daughter of noted rights activist Ela Gandhi and Late Mewa Ramgobind. However, it is known that she was refused to appeal both the conviction and the sentence by the Durban Specialized Commercial Crime Court.

The National Prosecuting Authority said that she allegedly provided forged invoices and documents. She used these documents to convince potential investors that three containers of linen were being shipped in from India.

mahatma gandhi’s great granddaughter Lata Ramgobind met Mr. Maharaj in August 2015. She told him that she had ordered three linen containers from India for South African Hospital group Net care. She entered into a contract with Mr. Maharaj then.

Prashant Kishor announces his future plans and declared his retirement from political management recently. He announced that...
Governance

The government decided to drop, Gandhiji's favorite hymn, "Abide with me" from the Republic day beating retreat. “Abide...
News

Akhilesh Yadav attacked the Congress, saying there is no difference between the grand old party Congress and...
Columns

Why some people hate Mahatma Gandhi

Sabarmati Ashram Redevelopment Project is opposed by over 130 eminent personalities from various parts of the country....