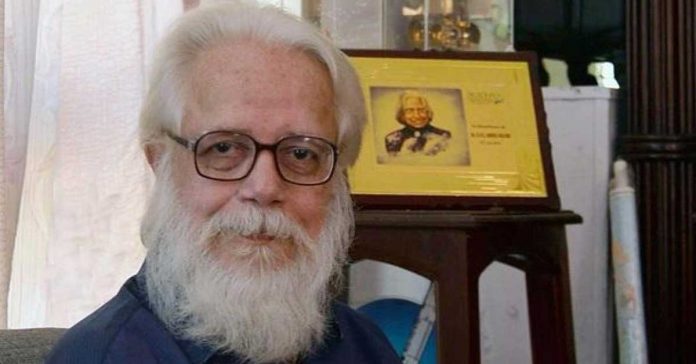 The Supreme Court had directed the government of Pinarayi Vijayan to hand over a compensation of Rs 1.3 crore to former ISRO scientist Nambi Narayanan.

The Pinarayi Vijayan government finally compensated Rs 1.3 crore to former ISRO scientist Nambi Narayanan. He was falsely accused and arrested in an espionage case, as directed by the Supreme Court.

Nambi was unlawfully arrested in December 2019 and was accused of leaking vital defence secrets to two alleged Maldivian intelligence officers in 1994.

The former ISRO scientist alleged that he was tortured during his 50-day custody and was forced to give a false statement. He had to spend around two months in jail before the CBI concluded the allegations against him were false.

Clearing Nambi of all charges, the Supreme Court said that the former ISRO scientist was “arrested unnecessarily, harassed and subjected to mental cruelty”.

Last year, the Modi government conferred him with Padma Bhushan.

While addressing a rally in Kerala’s Thrissur in January last year, the PM launched a scathing attack on UDF leaders for damaging the reputation of a scientist to settle internal petty politics.

PM Modi had alleged that the scientist was troubled and damage the national interest for their own politics. He said that he felt honoured that his government had the opportunity of conferring the Padma Shri award on Nambi Narayanan.

Narayanan was in charge of ISRO’s cryogenics division

Nambi was a brilliant scientist and at the time of his arrest, he was working as a senior official at ISRO and was in charge of the cryogenics division.

He was responsible for introducing the liquid fuel rocket technology in India when the country was still working on solid motors and played a major role in developing ‘Vikas Engine’ used for the first PSLV launch.