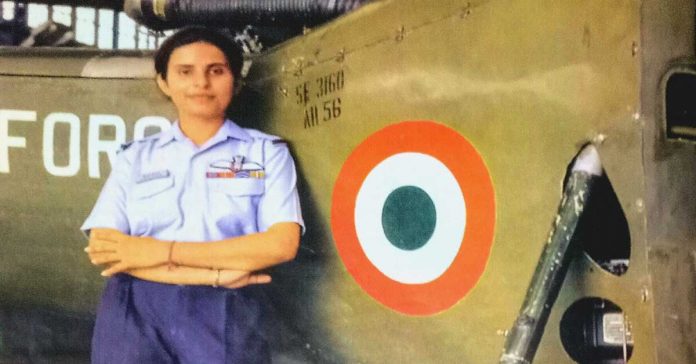 Gunjan Saxena is one of the first woman combat aviators, who entered into the war zone in the year of 1999 during Kargil War with her fellow lieutenant Srividya Rajan.

Initiation of women into battle fields started from 2016, but they created history and became the first ever women IAF officers who entered into the battle field.

A biopic on her is going to be released on Online Television platform on 12 August.  Her role is depicted by Jhanvi Kapoor.

She was born in Lucknow in the year of 1975 into an Army family.She completed her graduation from Hansraj College, University of Delhi in New Delhi with a Bachelor of Science degree in Physics and then joined the Delhi Flying Club at Safdarjung Airport.

Her father, Lt Col (retired) Ashok Kumar Saxena. Her brother also served in the Indian Army.Her husband Wing Commander Gautam Narain is an Indian Air Force pilot. Both of them have a baby girl in the year of 2004.

She always knew that she will join the Army after her graduation. She got the chance to join first batch of women air force trainees for the IAF. With her there were 5 others who got the chance to fly a Cheetah in a combat zone; Srividya Rajan was one of them.

She flew during the Kargil War and was stationed in Srinagar. She was 25 years then. As they were the first batch as women to fly in war zones they faced gender based problems like changing rooms.

She was also assigned several other roles like surveillance roles such as mapping enemy positions; she had to deal with makeshift landing grounds, heights of 13,000 to 18,000 feet and enemy fire.She was one of the ten pilots, based in Srinagar that flew hundreds of sorties during the war, evacuating over 900 injured casualties including those killed from Kargil. In the year of 2004 her career as a helicopter pilot ended after serving as a pilot for seven years. She lives in Jamnagar, Gujarat now.

She received Shaurya Chakra Award for being the first woman, who fought in the Kargil War.

ALSO READ: 21st Anniversary of Kargil Vijay Diwas: Things we ought to know