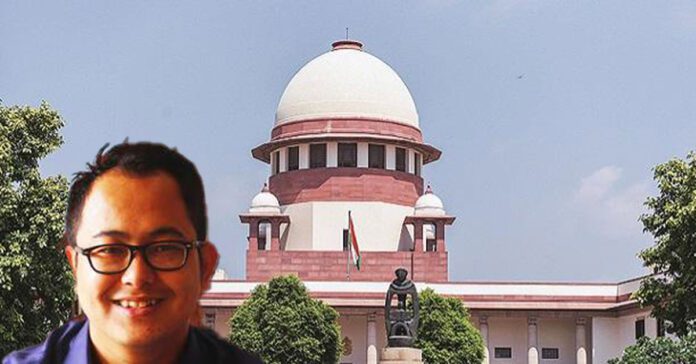 The Supreme Court ordered for an immediate release of  Manipur activist Leichombam Erendro. He is a Manipur-based political activist charged with sedition charges. The activist was arrested in May over some Facebook posts.

The 37-year old was held under the stringent National Security Act for saying “cow dung and cow urine don’t work”.

Meanwhile, the Solicitor General Tushar Mehta wanted the case of the Manipur-based activist to be adjourned till tomorrow. But, the judges ordered his immediate release.

A two-judge bench of Justices DY Chandrachud and MR Shah said, “we are of the view that the continued detention of the petitioner would amount to violation of right to life and personal liberty under Article 21.

The activist was arrested along with a journalist Kishore Chandra Wangkhem. The arrests came in the wake of a comment posted over the death of Saikhom Tikendra Singh, the then State BJP President.

The Vice-President and General Secretary of the BJP party in Manipur, filed a complaint against them saying their posts were offensive.

Earlier, in June 2020 also Mr Erendro was charged under sedition by the state police over his comment on a Facebook post. The post had the photograph of Mr. Amit Shah and a Rajya Sabha member from Manipur.

Erendro captioned the photo as “Son of a Servant”. He was later released on bail.

ALSO READ: Pegasus Spyware: All You Need to Know