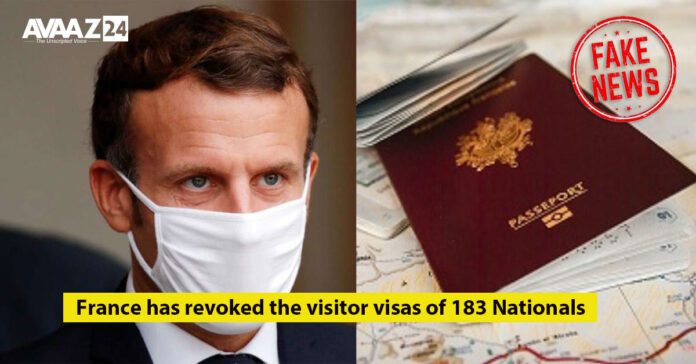 France takes a huge step and the action taken is to show and make it clear that France shall not bow down to the pressure on Islamic countries. French President Emmanuel Macron’s comments regarding Islamophobia, had made the Islamic nations and people angry.

Subsequently, Pakistan Prime Minister Imran Khan, remarked on this matter. The French government has been firm on it and made it clear that it will not bow down to the pressure on Islamic countries.

All this has happened but the news that France has revoked the visitor visas of 183 Pakistani nationals including the visas of the relatives of Lt Gen Ahmed Shuja Pasha, former chief of Pakistan’s intelligence agency ISI are fake and baseless.

The fake account also claimed that the French government forcibly deported 118 Pakistanis, intimating that this action of Macron government is directly linked to the anti-French rhetoric of Imran Khan.

This news was spread after President Macron spoke about an incident in which, A school teacher’s throat was slit by a young man in Paris for showing a cartoon of Prophet Mohammad in a school last month.