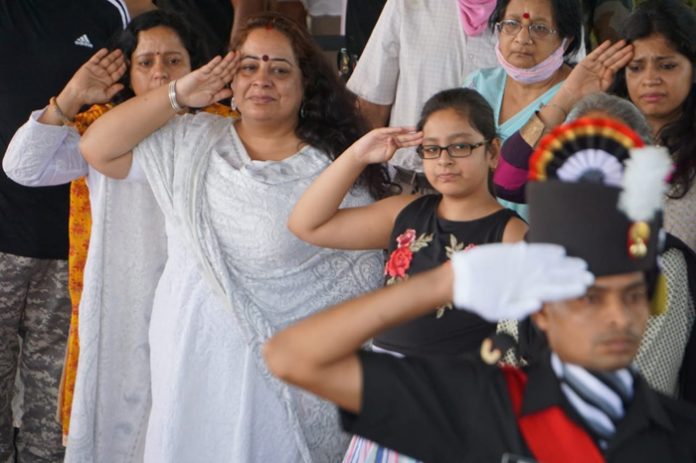 The mortal remains of Colonel Ashutosh Sharma of 21 Rashtriya Rifles were brought to his home in Jaipur on Monday evening. They were brought a day after he attained martyrdom while fighting terrorists in Jammu and Kashmir’s Handwara.

The mortal arrived in the capital of Rajasthan at 4.30 pm. The body remained with the family till Tuesday morning. Col Sharma’s last rites were performed with full military honours at the 61 Cavalry grounds.

Col Sharma is survived by his wife Pallavi Sharma and 12-year-old daughter Tamanna. Col Sharma’s wife and daughter stay at Rangoli Gardens Society in Vaishali Nagar, his family and mother have been living at Jaisinghpura in Jaipur.

Remembering her husband, Pallavi said, “I had last spoken to Col Sharma on May 1. Thereafter, he went for the operation. Last time, I had met him on February 28 in Udhampur. Thereafter, we had always spoken on phone.”

“I am a proud wife as my husband sacrificed his life while protecting the nation. Will not shed tears on his martyrdom. It is an honour to be sacrificed for the country,” she added.

Pallavi Sharma said Eeveryone should fulfill their responsibilities whichever field they are in”.

“It’s not that one can serve the country only by joining the Army. One should be a good human and a responsible citizen. Everyone must do their work with responsibility in whichever field they go,” she said.

Col Sharma’s mother said, “I spoke to my son two days back. He had said that he will take me to Handwara. He called me from everywhere he was posted regularly.