Bijay Mandal: A tower of victory in Jahanpanah [PHOTO STORY] 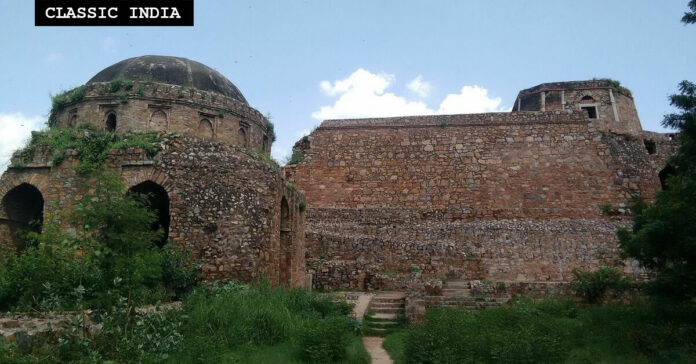 Bijay Mandal is a tower like terraced structure located within the enclosed walls of Jahanpanah. It is from Muhammad bin Tughlaq’s reign. 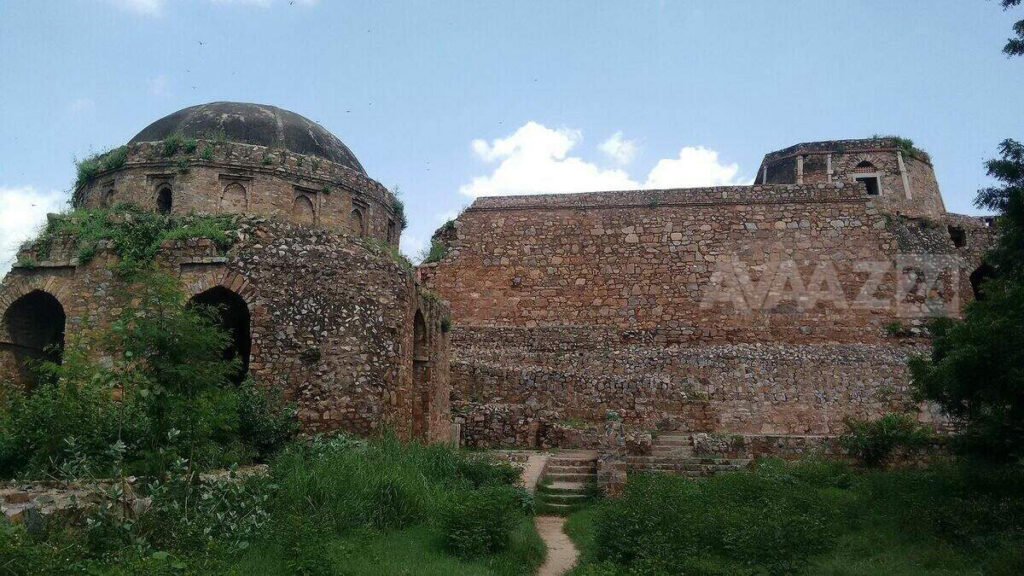 Bijay Mandal means Wonderful Mansion. It is also called Bedi or Badi Mandal.[Bedi– Huge; Mandal-Bastion] It lies to the north of Begumpur Mosque.

In the same fashion to Begumpur Mosque, this is also built in rubble masonry.

The tower is a massive octagonal structure on a raised platform. The platform measures approximately 74x 82m.

It has battered sloping walls on East, West & South; unquestionably it is a typical Tughlaqi architectural feature.

Each cardinal point has a doorway. From the west, a steep flight of stairs rises to the top of the platform.

The remains of Hazar Sathun (Palace of Thousand Pillars) are supposed to be at Bijay Mandal. But Ibn Battuta mentions this thousand pillared palace at Adilabad Fort.

John Burton in his Indian Islamic Architecture (Forms and Typologies, Sites and Monuments- 2008) says that Hazir Satun is the first example of intersecting vaulting in India.

At this Hazar Sathun, Ibn Battuta met Muhammad bin Tughlaq. He says, the pillars of Hazar Sathun are of wood.

Wood being perishable, they doesn’t exist anymore. To the west, only a long vaulted hall with a single room in second storey exist today.

The room now in existence has four doors. Even though, it is made of rubble masonry, its corners are protected with red sandstone. It has battered sloping walls of 20 feet high- a typical Tughlaqi feature.

Today, this Hazar Sathun is in dilapidated state. Even though, it is a monument under ASI protection, it is in gross neglect.

Adjacent, to Bijay Mandal, to the east, lays an arcaded residential building.

It is mausoleum of a Sufi saint, Shaik Hasan Taher.  According to “Akhbar-ul-Akhiar– a History of Muhammadan Saints”– by Abdul Haq Muhaddis (philosopher in the reigns of Akbar and Jahangir) the saint visited Delhi during the reign of Sikander Lodi.

He resided at Bijay Mandal as per Sultan Sikander Lodi’s order. He died in 909AH (1503 AD). His tomb is made adjacent to this tower. The group of graves in its neighborhood belongs to his family members. 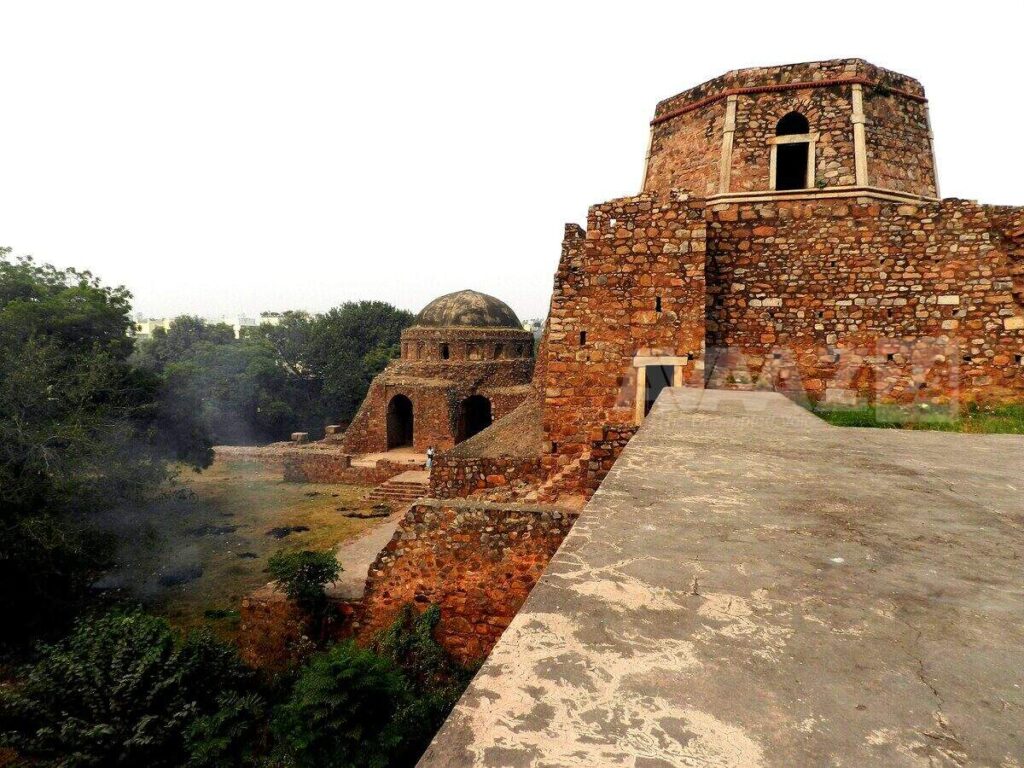 It’s not clear whether it was a bastion or a watch tower.

To begin with, according to the majority, it is a bastion of Jahanpanah- ‘Badi Mandal’or ‘Bedi Mandal’.

On the other hand, it is a watch tower  to Y.D.Sharma. Sultan Muhmmad bin Tughlaq used this for reviewing his troops. [Delhi and Its Neighborhood- 1964].

For, Syed Ahmed Khan it is a royal stand on gala occasions. [Asar-ul-Sanadid] 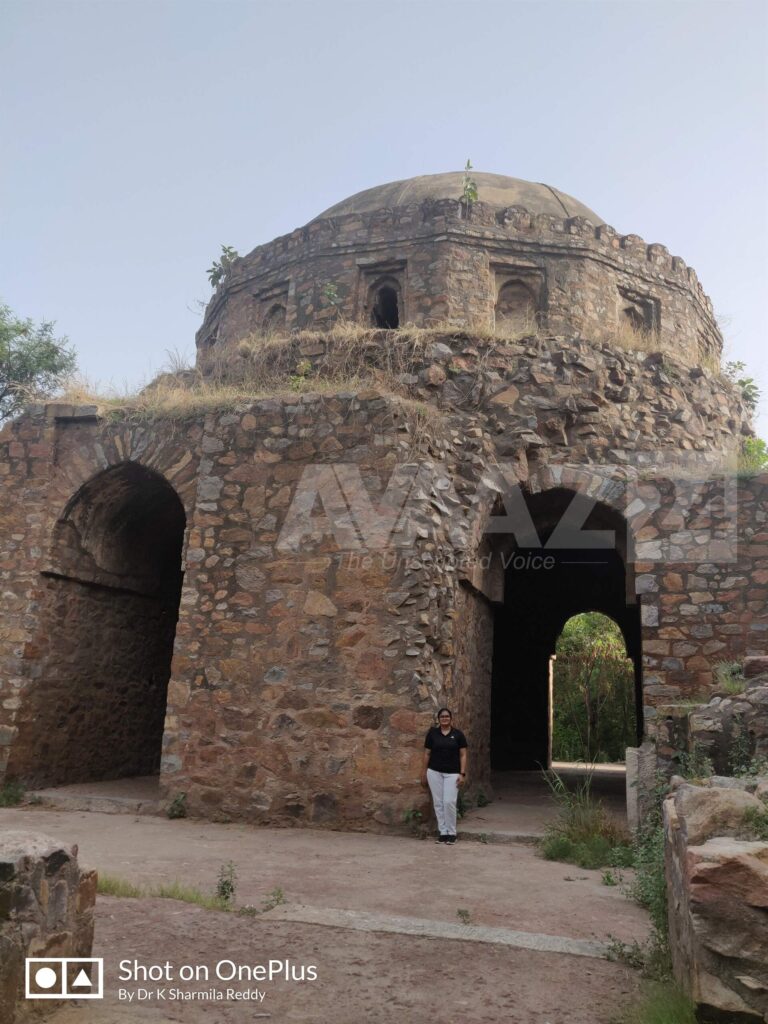 According to Gordon Hearn [The Seven Cities of Dehli- 1928] many Mongol lives are laid off, for this building’s foundation. Thus, it has been a tower of Victory. Without a doubt, Bijaya or Vijaya (Sanskrit word) means Victory.

Surprisingly, some villagers attribute this Bijay Mandal to Prithvi Raja Chauhan. Neither the chronicles nor the architecture support this view. 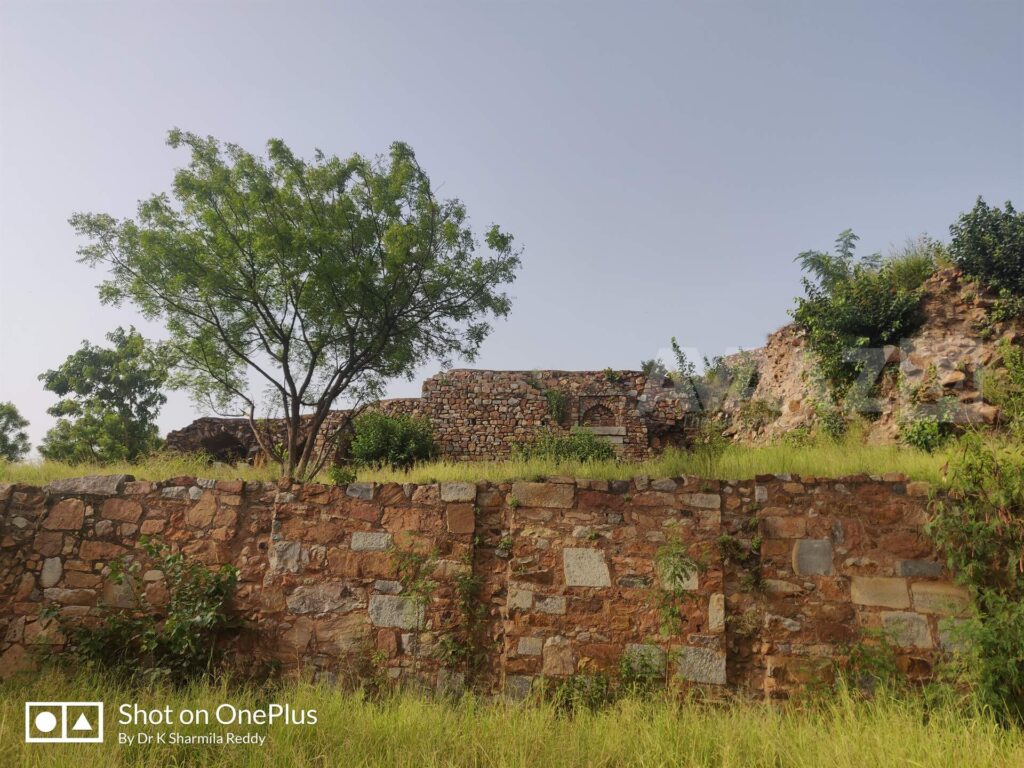 Excavations at Bijay Mandal in 1931:

A Poem on Bijay Mandal

Badr-i- Chach was a court poet of Emperor Muhammad bin Tughlaq. In his Qasidah [Odes or a satiric poem] he refers Bijay Mandal as Khurramabad. He mentions the competition of Khurramabad in Muharram 744 (June 1343).

“If the palace of a thousand pillars were not like Paradise,
Why should rewards and punishments be distributed there like as on the Day of Judgment?
Certainly, this abode of happiness, Khurramabad is chosen as a royal residence,
Because there the king,
By execution of the laws, acknowledges his subservience to the Kalifa of the world.”