Auspicious moment will last only 32 seconds of the Ram Temple, Ayodhya 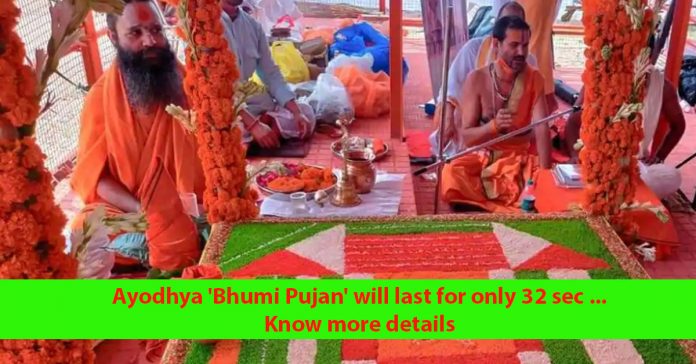 The religious rituals have begun on Monday itself. These rituals will culminate with Prime Minister Narendra Modi laying the foundation stone of the Ram temple in Ayodhya. One hundred and seventy five people have been invited for the event

Two days ahead of the ground breaking ceremony for a Ram temple, the religious rituals got under way in Ayodhya on Monday. Prime Minister Narendra Modi will lay the foundation stone for the temple in the August 5 ceremony.

Prayers were dedicated to Lord Ganesh by twenty one priests on Monday. Prayers to the deities of the dynasties of Lord Ram and goddess Sita, were offered. Prayers would be offered at Ayodhya’s Hanumangarhi temple, on Tuesday.

The priests and religious leaders supervising the entire event said that the muhurat or the (auspicious moment) will last only for 32 seconds on Wednesday – from 12:44:08 on to 12:44:40 pm

One hundred seventy five people have been invited for the event, out of which 135 are saints of that many traditions.

Adityanath called the event “historic”. He spent hours reviewing the arrangements for the ceremony at the Ram Janmabhoomi (birthplace), where the temple will be constructed following the go-ahead last year by the Supreme Court.

He said that it is not only a historic but also an emotional moment as after 500 years the Ram temple work will start. It will be the foundation of a new India..

People are urged to light earthen lamps, decorate temples and recite the Ramayana by the chief minister, in memory of those “who laid down their lives in the temple struggle”.

Festivities have started in Ayodhya ahead of the event. A bridge over Saryu river has been illuminated and priests performed ‘aarti’ at the ghat of Saryu river.

Temples across the city have been decorated with lights and diyas ahead of the grand event.