Anil Waychal: The Man who fought with The Cyclone Tauktae for 9 hours

I tried motivating my colleagues, saying we had to survive and all of us had to return to our families. 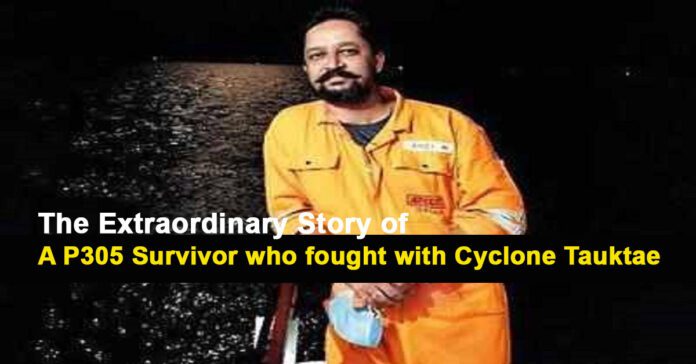 Nine hours, a Mechanical engineer, Anil Waychal’s hopes flickered with every wave he came across. He battled with the roaring waves for nine hours. He kept his spirits high, despite his friends drowning before him.

Waychal did not lose his courage. He felt that it was the end of his life with every violent wind which came towards him.

Anil Waychal, a 40 year mechanical engineer with Afcons infrastructure. He is a resident of Kumbhargaon village, Maharashtra. Fortunately, Indian Navy’s INS Kochi warship, rescued him. He battled the salty waters for nine hours.

Cyclone Tautae hit India’s west coast recently. He survived the sinking of barge P305. The barge was operated by Afcons, a contractor working on Oil and natural Gas Corporation(ONGV) fields off Mumbai.

On May 17, a ferocious storm hit P305 around 3AM. Anil and his colleagues had no other option but to jump into the sea around 5PM, as their vessel was sinking. However, INS Kochi saved him around 2AM on May 18. There were 261 people on board, 24 are still missing, while 51 bodies have been recovered.

Anil Waychal said, ”Nine hours like a lifetime. I didn’t think I would be able to meet my family again,” Even though, I had this inner feeling that I would be able to survive. I tried motivating my colleagues, saying we had to survive and all of us had to return to our families”.