Ammonium nitrate, the chemical behind the explosion in Beirut 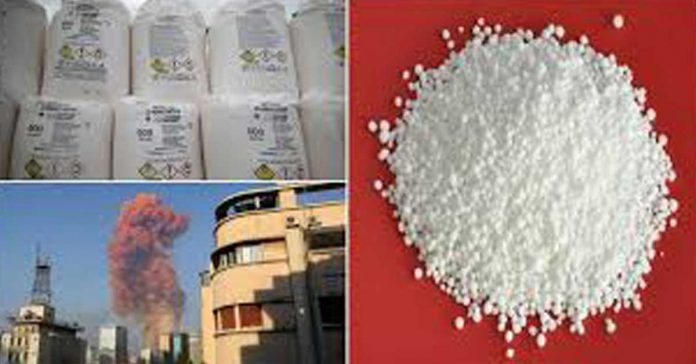 Ammonia is used in its anhydrous form (a gas) and the nitric acid is concentrated. The reaction is violent owing to its highly exothermic nature. After the answer is made , typically at about 83% concentration, the surplus water is evaporated off to go away an nitrate (AN) content of 95% to 99.9% concentration (AN melt), depending on grade.

There are several uses of Ammonium Nitrate, it can be used as a fertilizer because it is great source of nitrogen for plants, also frequently used as a key ingredient in industrial explosives.

Ammonium Nitrate is an inexpensive nitrogen source. It is highly stable under different conditions and also makes it a perfect ingredient in explosions.

Why is it dangerous?

Under normal circumstances it is not typically dangerous but it becomes deadly sometimes. When it comes in contact with fire it becomes highly explosive and as a result can release toxic gases such as nitrogen oxides and ammonia gas. There are several rules and regulations for storing it safely. The storage sites that can be used to store it should be without drains, pipes or other channels.

Ammonium Nitrate is the reason of Beirut’s explosion

According to Local officials, 2,750 tonnes of ammonium nitrate had been unsafely stored in a warehouse at the port where the blast took place since 2014, which may have triggered for Tuesday’s explosion in Beirut.  Beirut’s port and many buildings in the surrounding areas were completely devastated.

Beirut has been struggling with both the coronavirus pandemic and a severe economic and financial crisis. Now this blast has devastated the country completely. After the blast ambulances rushed to carry away the wounded people round the capital. It is the most destructive in all of Lebanon’s troubled history because they have seen 15-year civil war.
Houses around the port, where the explosion took place, wounded residents were found on the streets, buildings were shattered; streets were  filled with overturned cars. Doors and windows were blown out miles away. This incident damaged the city’s only international airport.