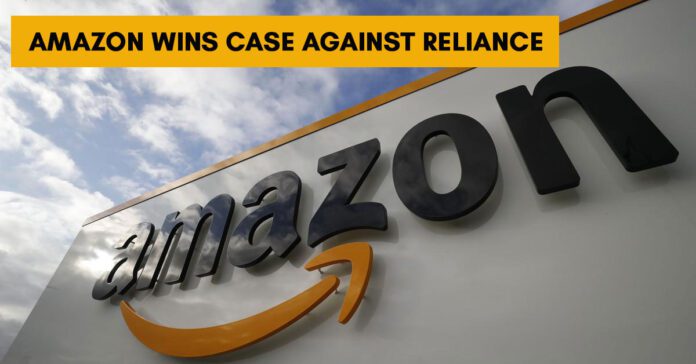 Amazon wins case against Reliance, the Supreme court on Friday gave a ruling in favor of the e-commerce giant Amazon. Amazon and Reliance Industries were at logger heads due to 3.4 Billion deal.

The most bitterly fought battles in the world in business came to an end on Friday. Amazon challenged against Future Group ‘s $3.4 billion deal with Reliance Industries.

Amazon has taken it partner company to the court regarding contract violation for over Rs.27,000 crore. However, the Future Group has denied any wrong doing.

Earlier, the Supreme Court reserved its judgement in the case last week. A Singapore tribunal had restrained Future group from going ahead with its merger with Reliance is valid.

However, a Delhi court gave a shocker to the American E-commerce giant. Furthermore, it revoked the previous court decision that effectively blocked the deal. After that Amazon filed a petition in the Supreme court.

Contrary to everyone’s thinking, Reliance Industries did not win the case. It proves that Judiciary is not dead yet in India.