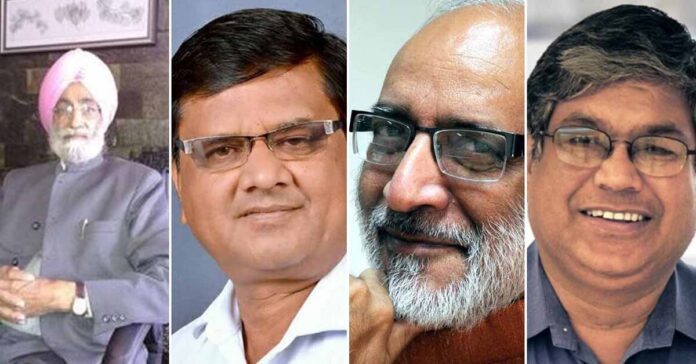 The Supreme Court on Tuesday 12 January stayed the three controversial farm laws and formed a four member committee to take over negotiations with the farmers and “solve the problem”.

Ashok Gulati, BS Mann, Anil Ghanwat and PK Joshi have spoken or written in support of the 3 farm laws in the past.

The four members are:

Surprisingly, all the four of the committee members have spoken or written in support of the farm laws. This has compelled people question the impartiality of the committee.

Ashok Gulati, for instance, has praised the farm laws from the beginning and has compared them to the 1991 economic reforms. Ashok Ghulati had expressed, that the laws are an important step towards getting “agri markets right”.

Bhupinder Singh Mann, who heads his own faction of the BKU, is one of the few farm union leaders, who has outrightly supported these laws. He had suggested that

“Reforms are needed in order to make agriculture competitive. But there should be safeguards,”. Mann is the chairperson of All India Kisan Coordination Committee (AIKCC). He had also met Agriculture Minister Narendra Singh Tomar in December and extended his support for the new laws.

Anil Ghanwat, heads the Maharashtra based Shetkari Sangathana. He has been expressing his support to the farm laws many a times. He has suggested for amendments to address farmers’ concerns. Ghanwat had also suggested a temporary stay on the laws, which is what the SC has now done.

Author Amaan Bali, expresseed that “It was an eyewash. Farmers unions were right in distancing themselves from it (the SC proceedings)“. He says that all four committee members are “known supporters of the government’s policies”.

According to farmers’ rights activist Ramandeep Singh Mann, “Supreme Court has formed a committee on the farm laws, which has Ashok Gulati, who is a known supporter. Then the whole thing goes wrong , as Bhupinder Singh Mann, is in the committee. The farmers are not ready to accept them, hence have decided to return (from the protests) only when the laws are repealed”.

Journey of farmers protest was a sequence of controversies during the year-long farmers' movement. The year-long movement...
Activism

The umbrella body of farmers' unions, The Samyukta Kisan Morcha, sent a 6-point agenda to the PM...
Columns

India celebrated its 72nd Republic Day, on Tuesday. This day is celebrated to commemorate the drafting of...
News

There were many questions being raised about Facebook, the social media giant’s alleged bias towards the BJP....
Activism

Today being the 15th day of the farmers’ agitation against the new Farm laws, farmer leaders have...