Varavara Rao gets bail on medical grounds for 6 months 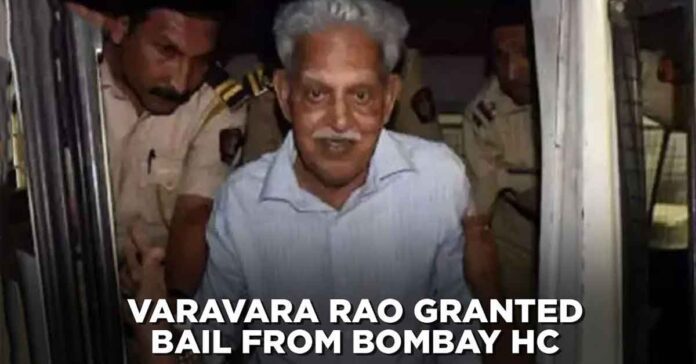 The Bombay High Court gets bail and said that after six months, the activist Varavara Rao should either surrender or apply for extension.

81-year-old activist Varavara Rao, who was arrested in connection with the Bhima Koregaon case. He was granted bail by the Bombay High Court on Monday. The activist is granted bail and given some relief on medical grounds for a period of six months.

The High Court said “On completion of six month, he should either surrender or apply for extension,”.

Mr. Rao was arrested in 2018 along with few other activists. He was booked under the stringent Unlawful Activities Prevention Act. This 81-year-old man is suffering from multiple ailments, is currently recuperating at Mumbai’s Nanavati Hospital.

Varavara Rao was almost on his deathbed, when the activist was shifted to Nanavati Hospital, by the High Court on November 18. Since then, the court extended his stay in the hospital on December 15,December 21 and then on January 7. The NIA has, however, maintained that he was fit to be shifted back to Taloja Jail, where he was lodged before being hospitalized.

Several activists and academics have been accused of making inflammatory speeches at the Elgar Parishad conclave held at Shaniwar Wada in Pune on December 31, 2017, which the authorities claim triggered the violence at Bhima-Koregoan war memorial the next day. One person was killed and several others were injured in the incident.

The first charge sheet of over 5,000 pages was filed by the Pune Police in November 2018. Activists Sudhir Dhawale, Rona Wilson, Surendra Gadling, Shoma Sen, Mahesh Raut, all were arrested in June 2018.

The police had argued that all these activists who were arrested had “active links” with the banned Communist Party of India (Maoist). The police claimed that these accused activists were plotting to kill Prime Minister Narendra Modi.

Another charge sheet was filed in February 2019, against human rights activists Sudha Bharadwaj, Varavara Rao, Arun Ferreira, Vernon Gonsalves and banned Communist Party of India (Maoist) leader Ganapathy. The activists have been charged with “waging war against the nation” and spreading the ideology of the CPI (Maoist), besides creating caste conflicts and hatred in the society.

The National Investigation Agency has been given this case by the Centre in January 2020. Eight people who have been named in the NIA charge sheet for the January 2018 violence are former IIT profess or Anand Teltumbde, his brother Milind Teltumbde, activist-journalist Gautam Navlakha, Delhi University associate professor Hany Babu, three members of the cultural group Kabir Kala Manch and Swamy.

The Bhima Koregaon Case is back in the headlines now. The death of the Jesuit priest and...