Uttarakhand: Bridge near Indo-China border collapses as truck with heavy equipment tries to cross it 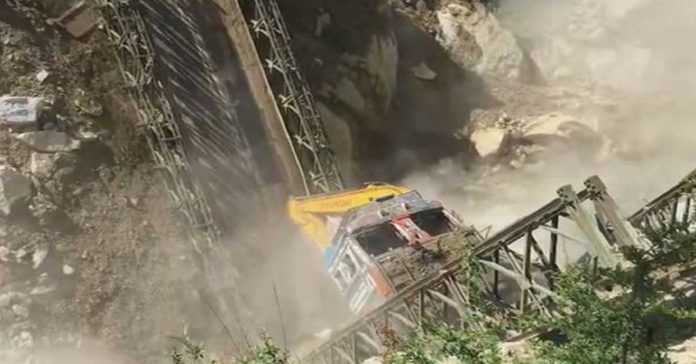 The bridge near India-China border in Uttarakhand collapsed when a truck carrying heavy equipment tried to cross it.

In a breath- taking incident, a bridge near Indo-China border in Uttarakhand suddenly collapses when a truck loaded with heavy equipment tried to cross it.

Two persons on the truck, including the driver, sustained serious injuries and were taken to a nearby hospital.

As seen in the video which surfaced on social media, a truck can be seen trying to cross a bridge with a person walking just behind it.

The truck successfully crosses more than half of the bridge’s length but as it reaches closer to the road, the bridge collapses and the truck falls in the gorge.

The bridge near India-China border in Uttarakhand collapsed when a truck carrying heavy equipment tried to cross it. #Avaaz24

According to reports, the truck was carrying heavy construction equipment and the bridge it was trying to cross is on Dhapa-Milam Road leading towards Indo-China border in Lilam Johar Valley.

The  local youth carried out rescue and relief operations, and both the injured persons were rushed to a nearby hospital.