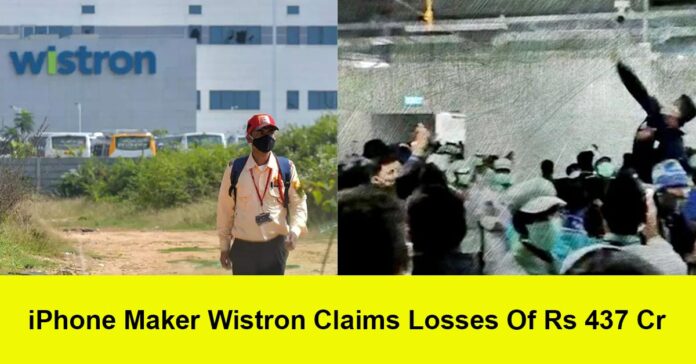 Employees at an iPhone production plant in Karnataka smashed windows, vandalised the massive factory and set fire to vehicles to protest reductions in pay. It is reported that the incidents began on Saturday at a facility, where the iPhone SE is assembled, which is run by Taiwan manufacturing company Wistron Corporation.

A day after employees at Karnataka based iPhone maker facility of Taiwanese contract manufacturer Wistron went on a rampage and vandalised the massive factory. The company has come out and stated that because of the incident, it has incurred losses to the tune of Rs 437 crore.

In a complaint stated by the company to the Karnataka‘s Police authorities and Labour Department, said that the massive loss of Rs 437 crore was primarily due to the theft of thousands of iPhones, and the damage caused to the assembly line and factory equipment.

The Taiwanese company is one of the three contract manufacturers of Apple Inc’s iPhones globally, the others being Pegatron and Foxconn.

Karnataka’s Labour Minister Shivaram Hebbar has said that this kind of damages are unacceptable. Peaking about the incidents, Hebbar shared that the company has around 1,200 permanent employees at the Kolar facility near Bengaluru, while it also employs 8,900 people on a contractual basis through contractors.