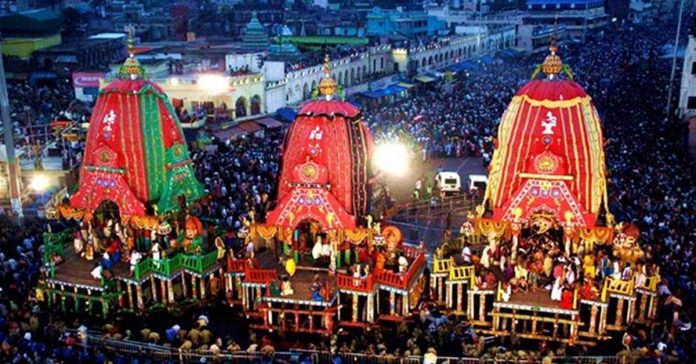 The Supreme Court on Monday afternoon finally gave its nod for the Rath Yatra.

The Supreme Court retracted its previous decision to cancel the festival amid high speculations.The three-member bench, headed by the Chief Justice of India, has taken the decision which allows Rath Yatra in a “restricted manner” ; without devotees and limited curfew to be imposed.

Remarkably, the festival has only been allowed for the city of Puri and not anywhere else in Odisha.

The top court has imposed limited curfew in Puri, and insisted that only selective servitors and police officials will be allowed to pull the chariots of the holy siblings of Lords Jagannath, Balabhadra and Goddess Subhadra.

Media persons will also be allowed to cover the event. Devotees can watch the Rath Yatra as the Supreme Court gives permission for live coverage.

In the wake of the mentioned development, Chief Minister Naveen Patnaik will chair a state-level Rath Yatra preparatory meeting at 5 pm today. It is to be noted that Chief Secretary Asit Tripathy along with Director General of Police (DGP) Abhay are already on their way to Puri on being directed by the CM.

The State Government had filed a special writ petition praying to allow the Rath Yatra, today morning, as it is a tradition of centuries and if the rituals are cancelled this year, then the holy festival cannot be held for next 12 years.

Gajapati Maharaj and Puri Shankaracharya had insisted that the State seek the apex court’s permission to hold the Rath Yatra. They had suggested that the festival could be held without the usual congregation of devotees, which was expected to touch 10-12 lakhs this year. Section 144 could be imposed and the pulling of chariots could be done by selective servitors and armed forces.

The apex court on Thursday had disallowed the annual Rath Yatra of Lord Jagannath and his siblings in Puri and elsewhere in Odisha. The Jagannath Puri Rath Yatra, which is considered one of the world’s biggest chariot festivals was set to commence from June 23 this year.

Prior to this, a three-member bench, headed by Chief Justice S.A. Bobde and comprising Justices Dinesh Maheshwari and A.S. Bopanna noted that in the interest of public health and safety of citizens, the Rath Yatra festival cannot be allowed this year. “Article 25 of the Constitution itself confers the right to freely profess and propagate religion subject to health,” said the court.

“Having regard to the danger presented by such a large gathering of people for the Rath Yatra, we consider it appropriate in the interests of public health and safety of citizens who are devotees to restrain the respondents from holding the Rath Yatra this year.

The ruling came on a plea by an NGO seeking direction to stay the holding of the Rath Yatra festival, which spans 10-12 days and involves the gathering of lakhs of devotees from across the world.

The plea filed by NGO Odisha Vikas Parishad claimed that presently, the entire nation including Odisha is facing an unprecedented situation due to Covid-19, where the lives of the common people are at a huge risk.

Following the Supreme Court’s order, the Odisha Cabinet in its emergency meeting on Thursday evening decided to abide by the apex court’s order disallowing Rath Yatra of Lord Jagannath in Puri this year.

The Cabinet informed the Shree Jagannath Temple Managing Committee to take steps to observe all rituals inside the temple premises following all guidelines in conformity with the Supreme Court’s order.

District Magistrates have been ordered to ensure that managing committees and institutions in different districts follow the Supreme Court’s order, additionally.

The Cabinet also made it abundantly clear that the Government of India’s (GOI’s) order no. 40-3/2020-DM-I(A) dated May 30 and Odisha Government’s order no 3057/R&M (DM) dated June 1 and national guidelines on COVID-19 have to be strictly observed and enforced.

Rath Yatra 2021: IMA says holding any festival can be dangerous