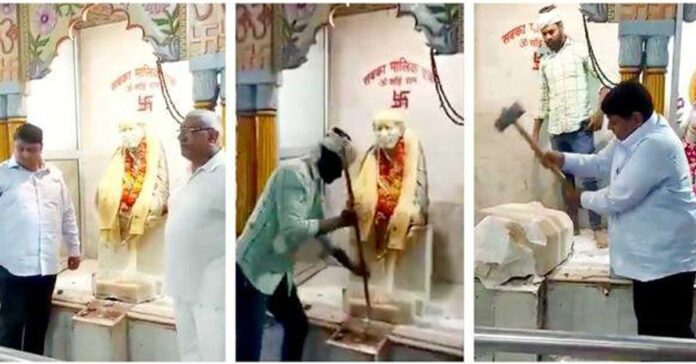 Sai Baba is labelled a Muslim

More than 66,000 gods and goddesses are worshipped in India. Off late, an incident sent shock waves through out the country. Few people removed the idol of Sai Baba at the Shahpur Jat Temple, in Delhi. They labelled Sai Baba as a ‘Muslim’.

Chanting ‘Jai Shri Ram’ has become mandatory to prove a person to be a Hindu. A person is supposed to chant these three words else one can be termed as an Anti-national. Giving importance to other gods also may trigger the angry of the so called nationalists.

The Sai baba idol was taken down from the Purana Shiv Mandir in Shahpur Jat on March 25 and was replaced by a Ganesh idol. It is said that they removed it as it was an old one.

No action taken yet

However, the police tried to keep the issue undercover. Furthermore, the police said that they are looking into the matter. Meanwhile, the temple authorities claimed that the idol was removed as it was old. The question then arises that why was it replaced by the idol of Ganesh?

A video became viral which shows workers removing the idol while a man was ordering them. It is also heard that the man was allegedly said that “He was no God, he died in 1916, he was a Muslim…” “Mullah Hai”.

DCP South, Atul Kumar Thakur, said that they were “inquiring into the matter”. Interestingly, the temple committee claimed that the video was a fake one. In contrast to this, a member of the temple said that the idol of Sai baba was removed as it was old. The idol was set up in 2009.

A complaint filed on March 31 addressed to the police, by the devotees of Sai baba, reads, “A few people came in and broke the idol of Shri Sai Baba while saying the idol should be removed as he is not a Hindu god but belongs to Muslims.

We request you to kindly take action against the culprits who conducted this heinous crime as this hurts the sentiments of people who believe in Sai Baba. We request you to ensure the restoration of Baba’s idol in the same temple premises as soon as possible.”