Rajinikanth is not entering into politics. A big disappointment to his fans 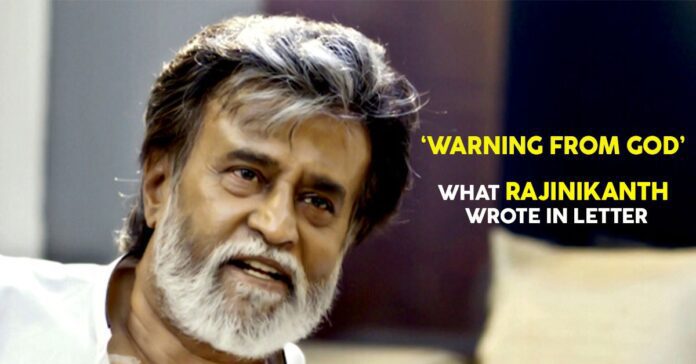 In a letter written by Rajinikanth to inform that he is not entering into politics, he said, “This decision of mine will disappoint my fans and people but please forgive me. I will serve the people without entering electoral politics.”

Superstar Rajinikanth had promised his fans “a wonder and miracle” in the upcoming Tamil Nadu elections earlier. Unfortunately, he announced on Tuesday that he will not be making his much-awaited political debut.

“With extreme sadness, I say that I am not entering into politics. I alone know the pain I went through while announcing this decision,” the 70-year-old movie star wrote in a letter in Tamil that he posted on Twitter.

“This decision of mine will disappoint my fans and people but please forgive me. I will serve the people without entering electoral politics,” he said.

Rajinikanth, was discharged from a hospital in Hyderabad on Sunday, after being treated for blood pressure fluctuations, cited his frail health.

“My hospitalization was like a warning from God. My campaign will impact health amid the pandemic. I thank office bearers for working with me,” Rajinikanth said.

Earlier this month, Rajinikanth had announced that he would launch his political party in January, five months before the Tamil Nadu elections, and bring “spiritual secular politics” with no caste or religion.

The announcement of not joining politics has ended years of speculation and followed consultations with senior office bearers of his forum, the Rajini Makkal Mandram.

Rajinikanth enjoys a vast unmatched fan following. He is a popular and respected movie star with a vast repertoire of films in Mumbai and in southern states.

Superstar Rajinikanth declared that he has no plans to enter politics. Subsequently, he dissolved his party, Rajini...
Entertainment

Rajinikanth is yet to take a decision about his plunging into politics. He has been meeting the...