PPE and Face Mask; New Poisonous Scar to our environment 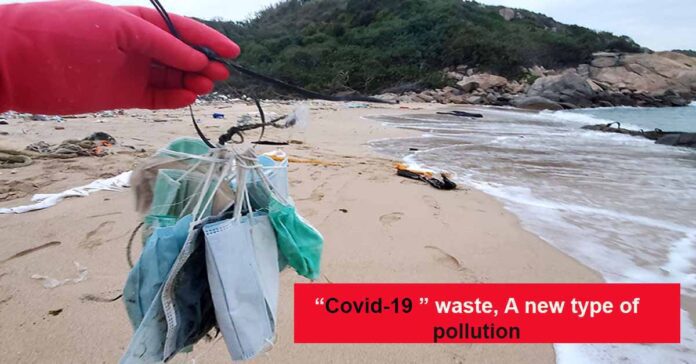 After a few months of lockdown, and when we could finally move out of the house, we went to the beach and noticed the masks and the gloves. Not only us, locals and tourists have found a disturbing new tide washing up on the beaches recently. Hundreds, if not thousands, of disposable face masks, plastic gloves and other debris, all of the result of Covid-19.

Many countries have made umpteen attempts to ban single-use plastics seemingly on hold amid the coronavirus crisis, but now many countries are drowning in an ocean of dirty and discarded personal protective equipment.

Marine biologist Emily Stevenson, 23, has been cleaning beaches with her family for more than a decade. Her team picked up 650 plastic gloves and 250 face masks on a stretch of the Cornish coast in the past two months.

PPE waste is found everywhere. It is hazardous to the environment as many masks have fine layers of plastic, including non-recyclable polypropylene, polyethylene and vinyl. If they are disposed of properly, they will end up in landfills or be destroyed, releasing toxic fumes.

If it is left in the ocean, it will take an estimated 450 years to degrade.

These are found more on beaches than anywhere else as its final destination would be in the seas or oceans. Whether it is dropped on the ground, blown out of a car door, or washed down into a drain by rainfall, it would ultimately reach the sea or eventually be washed onto a beach.

Previously, the most common items were cotton buds, crisp packets, plastic bottles and food wrappers, but now it is discarded masks and gloves.

According to the Global conservation group WWF, says that even if one percent of masks were not disposed of properly, then the natural environment would be filled up with about ten million masks a month, which is about 88,000lbs of plastic.

It is very hazardous for the sea creatures as the Covid plastic can easily be swallowed by them.

If the stomach is filled with plastic, it reduces the feelings of hunger and causes the animal to weaken, which would end up in a slow and painful death. Large pieces of plastic can block the intestines, while smaller bits can be scattered when excreted, putting even more animals at risk. The elastic straps that secure disposable masks are particularly hazardous for wildlife, which can easily become tangled in the loops

The effects of Covid-19 will remain for the generations to come, even if the virus is eventually contained.

ALSO READ: Flat pack coffins help the environment, is the in thing funeral costs and the grieving process differ

“Great Indian Nautanki Company” is the name of a company which was given credit of corresponding of...
Business

BJP blames the Telangana government for conspiring to defame the central government. The protests started around 8.00...
Load more