Palm Sunday, the beginning of the Holy Week and the Arrival of Jesus 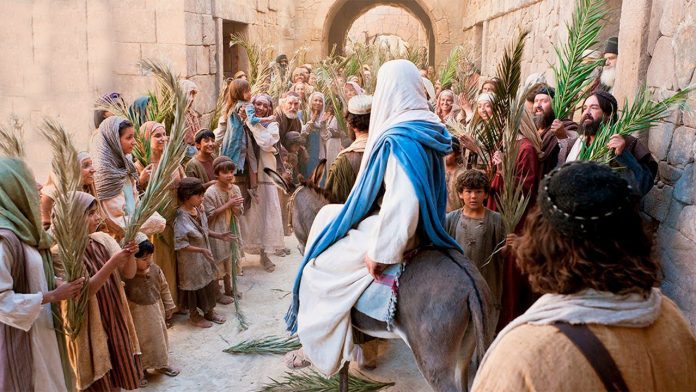 Palm Sunday marks the beginning of the Holy week and the arrival of Jesus in Jerusalem as Saviour and King. Jesus rode a donkey into the town of Jerusalem a large crowd gathered and laid palm branches and their cloaks across the road, giving Jesus royal treatment. The hundreds of people shouted “Hosanna to the Son of David! Blessed is he who comes in the name of the Lord! Hosanna in the highest heaven!”  It is also  the last week of Lent which starts on Palm Sunday and ends on Easter Sunday.

The crowds that went ahead of him and those that followed shouted, “Hosanna to the Son of David!” “Blessed is he who comes in the name of the Lord!”“Hosanna in the highest heaven!” When Jesus entered Jerusalem, the whole city was stirred and asked, “Who is this?” The crowds answered, “This is Jesus, the prophet from Nazareth in Galilee.”

How is it observed?

There are many traditions that take place on Palm Sunday but one of the most common is for individuals to give out or receive small crosses made from palm leaves, as a reminder of Jesus’ entrance into Jerusalem and his death on the cross.

1. The palm branch represented goodness and victory and was symbolic of the final victory, He would soon fulfill over death. God’s Word tells us that when Jesus rode into the city, the people cut palm branches and waved them in the air. They laid them on the ground.

2. In Biblical times, kings or important people commonly arrived in a procession riding on a donkey. The donkey symbolized peace.  those who had peaceful intentions chose to ride a donkey. Jesus reminded people that He is the Prince of Peace. This riding on a donkey is directly fulfilled the prophecies in the Old Testament.

3. People shouted “Hosanna!”.They were hailing Christ as King. That word actually means “save now,”. They were waiting for an earthly king in their minds. God had a different plan of bringing true salvation to all who would trust in Him.

4.  He already knew in His heart that it wouldn’t be long that these same people would turn their backs on Him, betray Him, and crucify Him. His heart broke with the reality of how much they needed a Savior.  The Bible says that Jesus wept for Jerusalem. In the midst of the praise of the moment.

5. Palm Sunday reminds us the reign of Christ. It is far greater than any mind of man could ever conceive or plan. Man awaits for someone to fight their battles in the present day world. Yet God sent His only begotten Son to fight the final battle over death. This is the greatness of why we celebrate this week. Because of Christ’s ultimate sacrifice, we can be set free of death.

We have so much to be grateful for this week. The enemy knows that, and you can bet, he’s going to do everything he can to try and distract us away from the true meaning of what this Holy Week means. Coronavirus may stop us in 2020, but don’t let him win.

May God direct our thoughts and attention towards what matters most, in this Holy Week, Jesus Christ is our King. Let’s worship our Lord, and thank Him for the gift of His sacrifice, celebrating the power of the Resurrection, and the new life found in Him alone. Grace.

Yet maybe in the midst of our busy lives, or in all of the upcoming thoughts about Easter, the real meaning of it may, even unintentionally, get missed.His Word reveals such great truths in every part of this story. Truths that draw us closer towards Christ, reminding us that He alone is King.