Pakistan Woman becomes head of a Village in UP, India. No one notices it for 5 Years 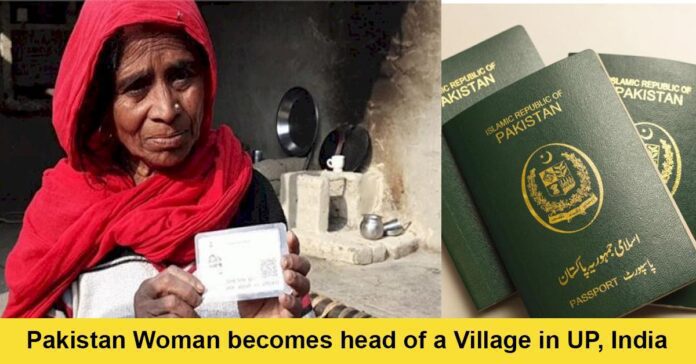 A Pakistani woman, identified as Bano Begum, a resident of Karachi, Pakistan came to India three decades ago. She never returned to her native country. Surprisingly, she was made the interim village head in Uttar Pradesh’s Etah district, earlier this year.

The woman, identified as Bano Begum, a resident of Karachi, Pakistan came to India 35 years ago to attend a relative’s wedding in Etah. Since then she has been staying on an extended Visa. She got married to a local resident and hence never returned.

Though she has been staying on a long time visa, Bano Begum, now aged 65 years has got the Aadhaar, voter ID and other documents. She was never granted Indian citizenship.

She contested in the local bodies election from Guadau gram panchayat in 2015 and was elected as a representative.

Bano was made the temporary head and was taking care of the matters related to Gudau village panchayat, after the death of the Village Pradhan Shahnaz Beghum, in January 2021.

However, her position was short lived after a resident of the village approached the authorities stating that Beghum was a Pakistani national. She was forced to resign from her post earlier this month.

On receiving this information, the District Panchayati Raj Officer (DPRO) has ordered to lodge an FIR against her and also investigate as to how she managed to get documents like Aadhaar and voter’s ID without being a citizen.

According to sources, it is said that Begum had applied for Indian citizenship several times but it was never granted.