Novak Djokovic disqualified from US Open: the bizarre incident 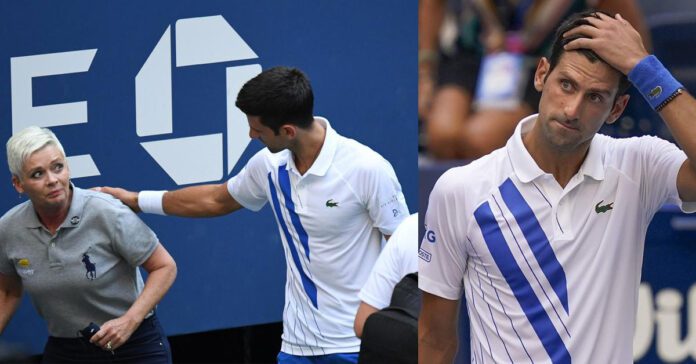 Novak Djokovic disqualified from US Open

Djokovic was disqualified even before completing a set because he hit the ball at a line judge.

Novak Djokovic was playing so well on the tennis court in 2020. That is before and after the shutdown caused by a pandemic. Nothing could stop him, but something extraordinary had to happen for him to lose a match.

Novak Djokovic was playing the US Open 2020, in New York. Unfortunately, the world No 1 was knocked out of the tournament. It was not because he was playing bad tennis, but because he hit the ball at a line judge.

Lead up to the match

Djokovic looked as unbeatable and had extended his winning streak in 2020 to 26 when he outclassed Germany’s Jan-Lennard Struff 6-3, 6-3, 6-1 in a routine third round victory.

How the first set was unfolding

He played against the unseeded Carreno Busta.  Djokovic played well in the first set. He played tennis efficiently without over-exerting himself. He was waiting for a opportunity to pounce on mistakes from his opponent. At 4-5, on the Spaniard’s serve, it seemed as if that moment had arrived.

Djokovic had three set points and Carreno Busta was about to lose the first set without having actually played all that badly. The set would have been over but for an incredible challenge.

Carreno Busta played an attacking game and fought through that game to keep the set on serve. The frustrations were visible on Djokovic as he angrily smashed the ball into the side of the court.

Djokovic was down 0-30, in the 11th game of the set. Unfortunately, he slipped and fell on the court while landing on his left shoulder. He drooped to the court on his knees in pain, and a trainer had to come out to attend the injury mid-game.

Djokovic was striking the ball alright but 0-30, after receiving treatment, soon ended up becoming a break of serve. He had a chance to close out the first set. Then the players started making their ways to their chairs.

Djokovic appeared to be looking the other way when he pulled the ball from his pocket and smacked it in the direction of the official unintentionally. It hit her full toss in the throat.

The official cried out and began gasping for air as she collapsed to the ground. Everyone could hear her struggle to breathe properly.

Djokovic (and the officials) immediately rushed over to her to check if she was okay. Djokovic placed his hand on her back as she struggled to breathe. He looked very concerned.  After a few minutes she got up and walked off the court looking shocked.

Djokovic pleaded his case with the tournament referee Soeren Friemel along side other officials.He was heard giving options aloud, “game penalty, set penalty, [there are] many options.”

But Alas! The umpire declared Carreno Busta had won by default. Djokovic shook hands with his opponent and left the court.