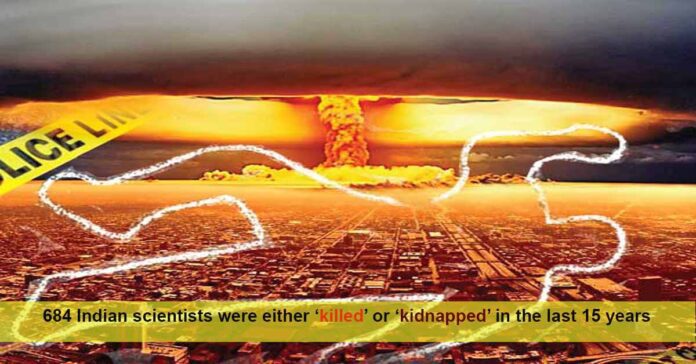 Do you know that 684 Indian scientists were either killed or kidnapped in the last 15 years? These cases are the famous mysteries but most unsolved, until now.

The most daunting thing is that these killings are still unsolved. Police did not find anything in all of these 684 cases. Can you believe it? It means that on an average there were 45 deaths per year and none of them are solved till now.

Over the last few years, a number of India’s nuclear scientists have been dying under mysterious circumstances and the police and the Forensics experts are classifying them either as ‘unexplained’ or suicides.’

Is it a coincidence or somebody else is machinating to stop India from becoming a space hegemony?

Let examine a few cases for your learning and then you can come to a conclusion.

Two engineers, KK Josh, and Abhi Shivam working on India’s first Nuclear ballistic submarine, INS Arihant, were found dead along the railway tracks of Vishakhapatnam. Even before any train would cross over them, they were found, but yet were dead. Reports claimed they were poisoned elsewhere before being placed on the tracks to make the deaths look accidental or suicide.

They were pulled from the line before a train could crush them, but were already dead. No marks were found on the bodies, so it was clear they hadn’t been hit by a moving train, and reports allege they were poisoned elsewhere before being placed on the tracks to make the deaths look either accidental or like a suicide.

Surprisingly, the media and the ministry of defence, however, have described the incident as a routine accident and didn’t investigate any further. Both of them were poisoned, but police never found the one who gave them the poison. To everyone’s surprise, the cases were closed.

Umang Singh and Partha Pratim Bag were a couple of young nuclear researchers at the Bhabha Atomic Research Center and both were burnt to death in a mysterious fire. Their bodies were found on December 30, 2009, in the radiation and photochemistry laboratory of the BARC.

A scientist of Nuclear Power Corporation, Ravi Mule was also found dead in the jungles of Pauri Garhwal, and as usual, this case never came to a conclusion too.

Just imagine, if this was the situation with the Indian politicians instead of our Indian scientists then would the scenario be the same? The government has not taken any action to stop all these mysterious killings.

The Indian media, who make a big hue and cry on small issues, do not even want to talk on this topic. The scientists who make India proud instead of settling in other countries and could earn millions of dollars are getting unknown deaths in return.

All these deaths under mysterious circumstances clearly indicate a conspiracy by foreign hands who want to create impediments in India’s nuclear programme and weaken India’s security.

Some people say that, the United States of America is the one behind all this, because it never wants India to be a technological dominion.

Nambi Narayan, was working on the development of the cryogenic engine development programme to make India a space hegemony, but he was arrested and his career was destroyed conspiringly.

This former ISRO scientist was “unnecessarily arrested and harassed” and awarded ₹50 lakh in compensation for the “mental cruelty” he suffered all these years. He was able to free himself of all the charges, but it took India away from its space programme for at least 15 years, and it brought disaster to the Indian space programme.

If he were not arrested, then India would have placed the satellites in 2000 which it launched in 2010. India could have entered the elite group of space club in 2000.

It was America who coerced Russia to break the Cryogenic technology agreement, and when Nambi Narayan was on the verge of building this technology on his own, America implicated him in a spying case through the agency of Kerala Police and Intelligence Bureau.

America never wanted India to become a nuclear dominion as when America got the inkling of the Indian nuclear programme, it made up its mind to exterminate Homi Jhangir Bhabha.

He was developing nuclear technology met his end in a plane crash, shortly after his announcement that India could produce its own nuclear device in a short time. However, on his way to Vienna, the Air India Flight 101 crashed near Mont Blanc, on January 24, 1966.

Moreover, after the defeat of Pakistan in 1965, America was petrified of India’s hegemony in south-east Asia. So, America and the American Scientists know very well about the capabilities of the Indian scientists, but they want to be the boss, rule the world and the one who bedraggle its hegemony are our Indian Scientists.

When nuclear scientist Lokanathan Mahalingam’s body turned up in June of 2009, it was palmed off as a suicide and largely ignored by the Indian media.

A former scientist Uma Rao was found, in April of 2011. Investigators ruled the death as suicide, but family members did not accept the verdict, saying there had been no signs that Rao was suicidal.

Miyer, an engineer at BARC, was found dead in his residence, on 23 February 2010.  However, as usual in such cases, no arrests were made and the investigation ran into a stone wall.

According to the Government of India, over just a three-year period, there have been at least nine unnatural deaths of scientists and engineers at just BARC as well as the Kaiga nuclear facility, of which two have been categorized as suicide, with the rest unexplained in terms of bringing to book those responsible.

ALSO READ: Journey of Abdul Kalam: From son of a boatsman to a rocket builder