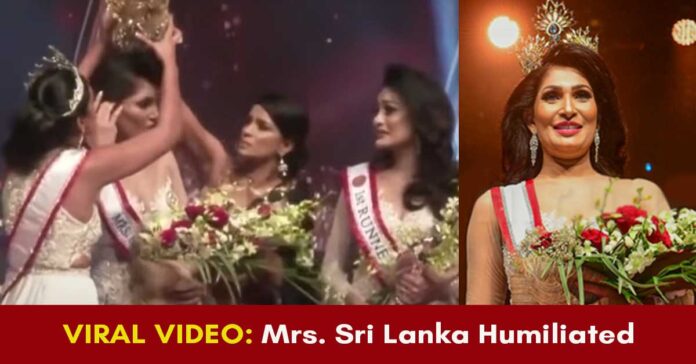 In a shameful act, Mrs. Sri Lanka was crowned and de-crowned by the reigning Mrs. World and 2019 Mrs. Sri lanka, Caroline Jurie. She stripped off the crown from Pushpika De Silva. She removed the crown just after few minutes of declaring Pushpika as the winner.

The drama of removing the crown is one of its kind in the history of beauty pageants. Confusion and heights of humiliation was let loose on the stage. Firstly, Pushpika De Silva was crowned and then de-crowned after a few minutes. However, the crown was given back to her later.

Mrs. World, Caroline Jurie, stripped off the crown of Pushpika De Silva, citing that the participants should be married and not divorced as per the rule of the contest.

She was not only de-crowned as the winner of Mrs. Sri Lanka 2021 title, but also suffered head injuries after an onstage chaos. Consequently, moments after the announcement, the 2019 winner de-crowned De Silva’s crown citing the rules of the pageant. She could not be awarded the title because she was divorced.

Caroline Jurie, seemed desperate to strip off the crown and while doing so she said, “There is a rule that prevents women who have already been married and are divorced, so I am taking steps to make the crown go to second place”.

Immediately, Jurie took off the crown from De Silva’s head and placed it on the runner-up. Sadly, De Silva walked off the stage with tears rolling down her cheeks.

A video of the incident has gone viral on social media.

(1) Mrs. Sri Lanka 2021 held at the Nelum Pokuna Theatre earlier today, ended a short while ago in a brawl.

Previous articleSai Baba labelled as a Muslim by North Indian Hindu devotees
Next articleHow COVID-19 Pandemic is an embarrassment to Humankind?

Child Sexual Abuse: Why should we think beyond Good Touch, Bad Touch?

Sexual abuse of a child is a form of Child Abuse. Many schools are educating children on the...
Crime

The Kottayam court acquitted Bishop Franco Mulakkal, of all charges of raping a Nun after a trial which...
Life Style

What is Gaslighting in a Relationship? How to resolve the conflict

Sandhya and Ravi are newly wed couple. Both are working. Before marriage after talking to each other regularly on phone...
Classic India

Amidst the recent debates on name of the city Hyderabad, we at Avaaz24 tried to analyze the historical...