India-Nepal Ties Bound By Roti-Beti, No One Can Break It: Rajnath Singh 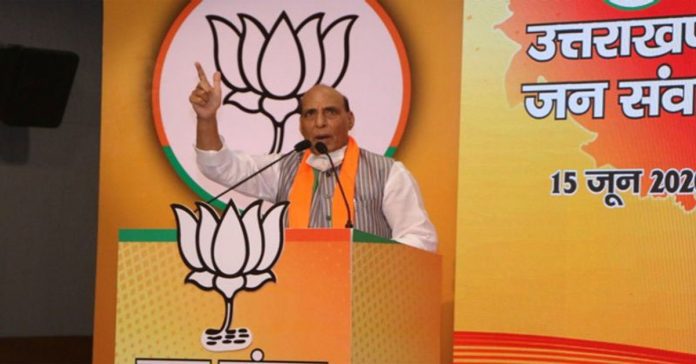 On Sunday, the lower house of Nepal’s parliament approved a new map including Indian Territory.

Defence Minister Rajnath Singh said today that India-Nepal ties are not ordinary and no power in world can break the bond, that the countries were bound together by “roti-beti“.

“If there is any misunderstanding between India and Nepal, then we will sort it out through dialogue,” Rajnath Singh said at a virtual rally amid strain over Nepal clearing a new map that includes parts of Indian Territory, a move linked to the neighbouring country’s objection to a new border road.

“There is some misunderstanding in our neighbor Nepal on the road. The road built by BRO (Border Road Organisation) in Lipulekh is very much in Indian Territory,” the Defence Minister asserted, addressing workers of the ruling BJP via video.

On Sunday, the lower house of Nepal’s parliament approved a new map including Indian Territory. The map shows a sliver of land on the east of river Kali, jutting out from the northwestern tip of Nepal.

The area includes the Lipulekh Pass in Uttarakhand and also Limpiyadhura and Kalapani, which are highly strategic areas that India has guarded since the 1962 war with China.

Nepal published its revised map in May after India inaugurated an 80-km road connecting Uttarakhand with Lipulekh on the border with Tibet. India has rejected the map and called it a “unilateral act” based neither on historical facts nor evidence.