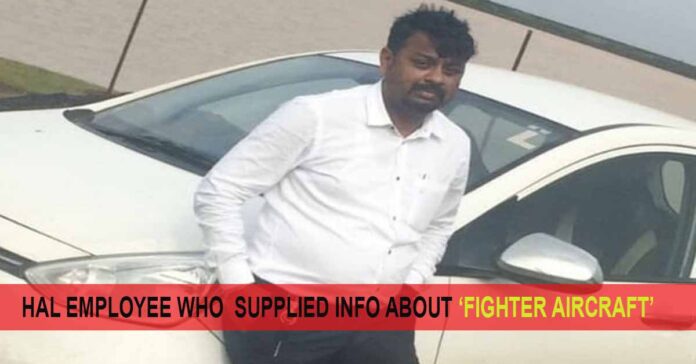 The accused was remanded in police custody till October 19 after being produced in the court.

An employee of the Hindustan Aeronautics Limited was arrested by The Maharashtra Anti-Terrorism Squad for allegedly supplying secret information on fighter aircraft to Pakistan’s Inter-Services Intelligence agency on Friday.

The state Anti-Terrorism Squad of The Nashik unit received reliable intelligence about the man, who was in constant touch with ISI.  The man, who was identified as Deepak Shirsath, was supplying confidential information about Indian fighter aircraft and their manufacturing unit to the Pakistani spy agency through WhatsApp and social media.

Rathod said Shirsath also shared information about the HAL aircraft manufacturing unit at Ozar near Nashik, the airbase and prohibited areas inside the unit.

Shirsath has been working as an assistant supervisor with HAL for 15 years, and was picked up from his residence in Nashik. An offence has been registered against the 41-year-old under the Official Secrets Act. After Shirsath confessed to providing information to the ISI, the Anti-Terrorism Squad recovered Three mobile handsets along with five SIM cards and two memory cards from him.

The seized phones and other electronic equipment were sent to the Forensic Science Laboratory, an unidentified Anti-Terrorism Squad officer added. Shirsath was produced in court and remanded in police custody till October 19.

HAL’s Aircraft Division Nashik was established in 1964. It has manufactured MiG-21FL aircraft and K-13 missiles, as well as other MiG variants like MiG-21M, MiG-21 BIS, MiG-27 M and the Su-30 MKI fighter jet.

The Uttar Pradesh Anti-Terrorism Squad arrested a Border Security Force soldier from Noida for allegedly sharing confidential information with agents from the ISI, in September 2018. Earlier Achutanand Misra was allegedly “honey-trapped” by a woman who claimed to be a defence reporter. He was into sharing information on unit operations, details of ammunition and training at the police academy.

ALSO READ: Is India turning into Pakistan! Where is Ram Rajya?