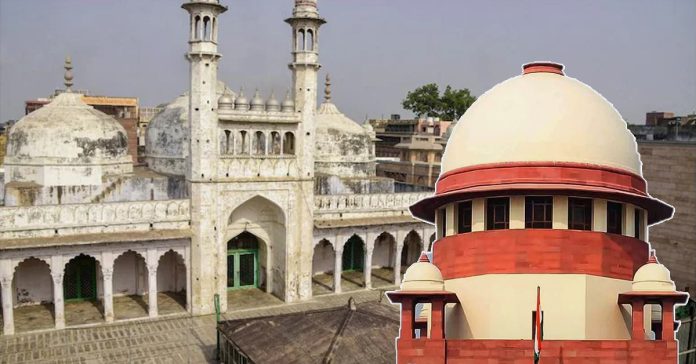 The Supreme Court will hear the Gyanvapi mosque case today. Earlier, on Tuesday, the court had directed the Varanasi court to ensure protection of the area.

The Supreme Court directed the Varanasi court to ensure the protection of the area where the Shivling claim is made, but without impeding “religious observance”, on Tuesday.

Meanwhile the Hindu petitioners say that the case will be heard in the Varanasi court on May 23. Whereas, the Muslim petitioners said both the sides filed their “objections and counter-objections” before the trial court on Thursday.

On 6 May, a video survey started. However, the next day they faced large protests. Eventually, the survey had to put on hold. Later, heavy police forces were deployed and the survey was continued.

The team inspected basement rooms and locked rooms were opened. However, the survey ended peacefully. The information was leaked and the claims of the presence of a Shivlinga inside the mosque spread like wild fire. Subsequently,  the area was sealed.

The Muslim petitioners said that it was part of the water fountain mechanism in the Wazoorkhana reservoir. It was being used by devotees to perform ritual ablutions before offering the namaaz.

Hence, the Supreme Court directed the Varanasi court on Tuesday to ensure the protection of the area.

To everyone’s amazement, the Gyanvapi mosque report which was meant for the court was made public.

ALSO READ: Gyanvapi Mosque: History, claims and all you need to know