Foreign minister Qureshi’s legs were shaking as he said India could attack over Abhinandan: Pakistani MP 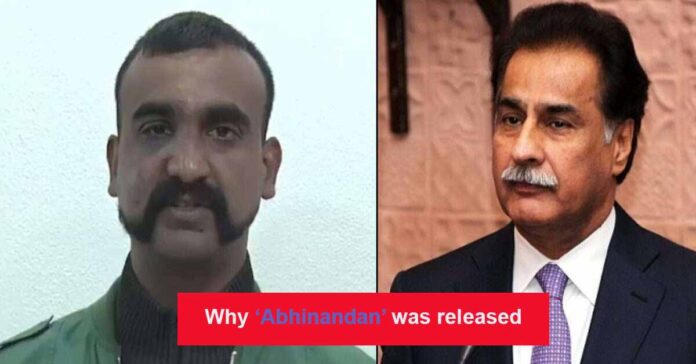 While responding to accusations by a member of the ruling PTI party that the former PML-N government hadn’t properly handled national security issues, Former speaker Ayaz Sadiq, said that Pakistan foreign minister Shah Mahmood Qureshi’s “legs were shaking”. The Pakistani opposition lawmaker said that when Qureshi told a meeting last year that India would attack if Indian pilot Abhinandan Varthaman, shot down in a dogfight, was not returned.

Sadiq was responding to accusations by a member of the ruling Pakistan Tehrik-e-Insaf (PTI) party. They had accused that the former PML-N government hadn’t handled national security issues properly. They pointed out at cases such as the case of former Indian Navy officer Kulbhushan Jadhav, who was detained by Pakistani authorities in 2016 on charges of espionage.

Mr. Sadiq speaking in Urdu said that he still remembers that Shah Mahmood Qureshi was in a meeting to discuss about the case of Abhinandan. The prime minister, Imran Khan had refused to attend and hence the chief of army staff had joined the meeting. He said that [Qureshi’s] legs were shaking and there was sweat on his brow.

“He had told everyone in the meeting, ‘For God’s sake let this man [Abhinandan] go back because at 9 pm on that night, India will carry out an attack on Pakistan’,” he said, talking of a meeting of government officials with parliamentary leaders held sometime after Abhinandan was shot on February 27, 2019 amid an India-Pakistan standoff.

He said that India wasn’t going to attack, nothing was going to happen. But the leaders then knelt down and sent Abhinandan back. He told the leaders that the opposition would be forced to disclose such things if the ruling PTI levels such allegations on them.

Though Sadiq didn’t reveal any more details during his brief speech in the National Assembly but while talking to a news channel said that if the ruling party referred to them as “Modi ka yaar”, then they would be forced to reveal such secrets.

He told the news channel that Qureshi made such remarks at a meeting where parliamentary leaders, including those of PML-N and Pakistan People’s Party (PPP), were present as it irked him a lot. He also reminded that the opposition had supported the PTI government on all issues, including Kashmir and Abhinandan. He also clarified that they would no longer be appropriate to provide further support.

Tensions between India and Pakistan had spiked following a suicide attack by the Jaish-e-Mohammed (JeM) at Pulwama in Jammu and Kashmir on February 14, 2019 that killed 40 troops.

India retaliated by carrying out an airstrike on a JeM base at Balakot in Pakistan, and this was followed by an aerial engagement along the Line of Control (LoC) that resulted in the shooting down of an Indian combat jet piloted by Abhinandan Varthaman.

The immediate tensions eased after Pakistan freed Abhinandan on March 1, 2019, but relations between the two countries continue to be at an all-time low. India has maintained that there cannot be any dialogue with Pakistan till the neighbouring country stops backing cross-border terror.