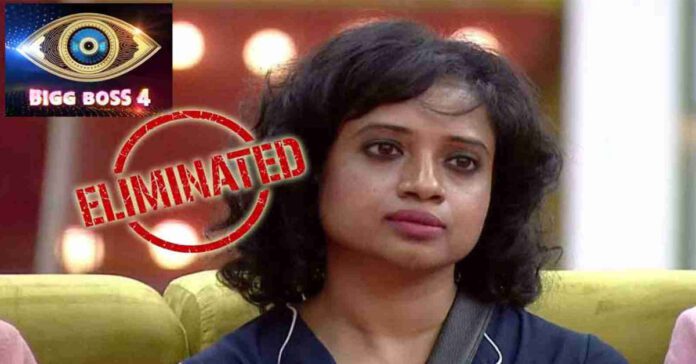 The anchor Devi Nagavalli is the third contestant to be evicted, after director Suriya Kiran and Karate Kalyani.

Watching Bigg Boss Telugu during the weekend is fun. Weekends are filled with suspense as they bring anxiety at the threat of eviction of favourite contestants and the sadness of separation.

Devi Nagavalli  is the latest contestant in season 4 of the show to be evicted from the Bigg Boss house. She is the third contestant to be evicted, after director Suriya Kiran and Karate Kalyani.

She was directly nominated for the eviction process by Karate Kalyani last week. She repeatedly claimed that the game was scripted after being evicted herself.

Karate Kalyani, bid adieu to the show, and warned the rest of the housemates to be alert of Devi, claiming that she was very smart and had an influential presence in the house.

In the first week, Surya Kiran also did the same and warned others about Devi. As a result, she was exempted from doing any work for an entire week. Besides Devi, contestants like Lasya, Ariyana, Monal, Harika, Kumar Sai and Mehaboob, too, have been nominated for the eviction round.

Devi is a renowned Telugu news presenter and journalist, currently working with the reputed news channel TV9. She is popular for her on-ground reporting and striking interviews with political and film personalities. She is a perfectionist and one of the strong contestants in the house.

Devi was widely criticised in the house as she called Amma Rajasekhar and Kalyani the house ‘zeroes’ in the hero-zero task the previous week. It is widely said this might be the reason why Karate Kalyani nominated Devi to be evicted. Now Devi has dropped the Bigg Bomb on her best friend Ariyana Glory, who will be saved from the eviction from the fourth week.

The weekend episode started with an emotional tribute to the legendary singer SP Balasubramaniam. Nagarjuna Akkineni paid homage to legendary singer SPB. Nagarjuna had a beautiful association with the singer, who sang a number of hits featuring Nag. Annamayya and Geethanjali are regarded as the best albums that feature the talented pair of Nagarjuna and Balasubramaniam. He said “We won’t get to hear SPB’s voice again. The blessing is gone. I am sure celestial beings are enjoying his music.”

Later Nagarjuna introduced and welcomed Swathi Deekshith, who entered the BB house as the third wild card contestant of the season on Friday. She shot into fame as the winner of the TV show Andamaina Bhamalu and went on to act in Allari Naresh’s Jump Jilani, Ladies and Gentlemen, and the Tamil film Simbaa. Nagarjuna also congratulated Gangavva on her captaincy. Talking about the week’s task, he pointed out Kumar Sai’s limited participation.

During the last weekend’s episode, Nagarjuna even lashed out at the contestants for playing safe. However, this week seems to be better as the contestants played a fair game compared to the previous weeks. The fourth season, within a week of its launch, has gained huge popularity because of its many twists and turns. Produced by Endemol Shine India through Viacom 18, Bigg Boss is an Indian reality television game, which has been extended to seven Indian languages.