Daughters in Pool of Blood, Parents in Trance: Scene of AP Murder 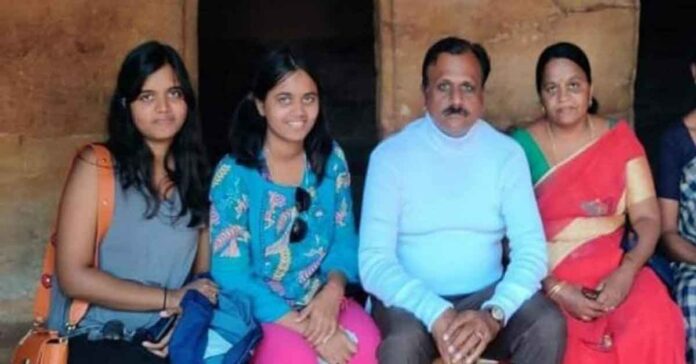 The parents allegedly murdered their daughters as part of a ritual and told police that they would come to life soon.

The Madanapalle Rural Police forced their way around 8:05 pm on Sunday, into the residence of Padmaja and Purushotham Naidu, a couple from Madanapalle in Chittoor district, AP. The police had rushed to the residence of Naidu after they received a call from neighbors at 8 pm. The neighbors had complained of “torturous noises,” and “loud screams and chants” coming from the house.

Inside the house, the police found the two girls Alekya (27) and Sai Divya (22), both bludgeoned to death with dumbbells, allegedly by the parents as part of a ritual.

According to the Deputy Superintendent of Police Ravi Mohana Chary, when the police entered the home, they found Purushotham sitting in the living room on the couch. He seemed to be in a state of trance.

When the police team began their search in the house, they found the body of Alekya, the eldest daughter, in the puja room on the ground floor. The police sources said that Alekya had a deep injury on her forehead. Sai Divya was found in a pool of blood in her bedroom located upstairs, police said. Both the girls were naked.

Alekya was a student of the Indian Institute of Forest Management and Divya was a BBA graduate pursuing a career in music.

“Their heads were bludgeoned with a blunt weapon and they were cracked open,” DSP Ravi Chary said. The police team then found Padmaja, sitting on the bed. “She was looking at the wall. She did not seem to be aware of our presence,” he said.

According to neighbours and colleagues, Purushotham’s family were deeply superstitious. While V Padmaja is the correspondent and Principal of a corporate school in Chittoor, V Purushotham Naidu is an associate professor from the Chemistry department in Government Degree College, Madanapalli. The couple were highly accomplished academically.

“The couple were followers of Mehar Baba, Sai Baba and Rajaneesh or Osho. They regularly used to visit Shirdi. They seem to be very spiritual,” Madanapalli Inspector M Srinivas said. At the crime scene, police found a picture of Mehar Baba. Recent posts of Alekya on social media confirmed her spiritual inclination.

As the couple were in a deep state of shock and trauma, police could not question them immediately.

When they asked Padmaja about the murders, she allegedly lost her temper and allegedly shouted at the police for “disrupting the ritual”, which she believed would resurrect her dead daughters.

“She said that we brought demons into the house when we opened the doors. She asked us to leave and come back the next day and witness the miracle that was about to happen in the house, where her daughters would come back to life,” the DSP said.

Ravi Chary said that the family of four remained isolated ever since the pandemic set in. “The domestic workers too were not allowed inside the house,” he said.

Police said that the couple were not in a condition to be questioned. “The mother said that there was evil inside her younger daughter’s head. So, she broke it open.

“It is hard to describe what we saw. It was difficult for us to understand,” DSP Ravi Chary said.

Padmaja and Purushottam allegedly told the police officers at the crime scene that ‘they received signals from heaven’ and that theirs was a ‘house of miracles’.

“They told us that a miracle was about to happen which had been spoiled by us entering the house. They told us that the morning after the magic that would occur would be spoken about by the whole world,” he added.

The Madanapalli Police have registered a case of murder against Padmaja and Purushottam. The police said they were going to bring in a psychiatrist to assess the mental well-being of the couple. “They seemed to believe every word they said. We want to assess their mental health,” the DSP said.

Police said that the couple is under surveillance and that they would be arrested soon after a psychiatric evaluation.