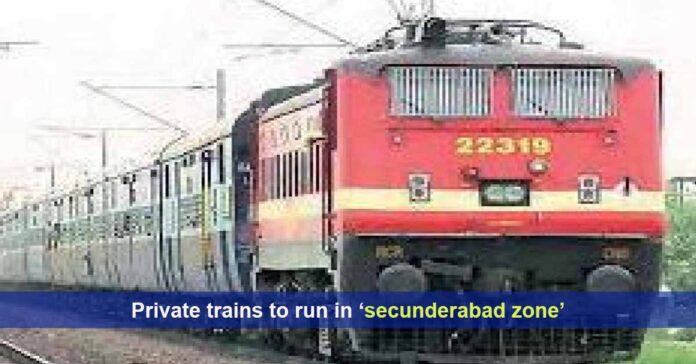 Big firms like Megha Engineering, BHEL, L&T and GMR are keen on running private train operations from the Secunderabad cluster

Privatization of railways or Private trains, are supposed to set to bring a major change in train operations. Railways have got a big boost as several firms have come forward to operate these trains from Secunderabad to different parts of the country.

According to the South Central Railway (SCR), 10 firms have shown their interest in private train operations from the Secunderabad cluster. Around 120 applications were received from 15 applicant firms, including Public Sector Units, for the 12 clusters, for private operations across the country.

Private trains will be operated on 11 routes which are finalised by the Railways. The routes include Lingampalli–Tirupati daily, Cherlapalli– Chennai daily, Lingampalli–Guntur daily, Secunderabad–Guwahati biweekly, Cherlapalli–Varanasi weekly and Cherlapalli–Panvel weekly.

A semi-high speed train on the Lingampalli route, named Tejus is being planned by the Railways to operate it. The Private trains whould have modern onboard facilities on par with that of Rajdhani Express, Gatimaan Express, Shatabdi Express and Duronto Express.

“The private firms are going to be selected through a transparent two-stage competitive bidding process,” a politicians aid, adding that the method was being expedited and every one the clusters would be awarded by next February.

What are private trains?

Private firms will facilitate Wi-Fi, modern coaches and seating, clean washrooms and good food. As a part of Privatisation, engines will be hired from the Railways while private firms will have the liberty of keeping their own coaches.

“Railways will receive haulage charges on a per-km basis from private firms for using the infrastructure in operating trains, tracks, signaling and related manpower. An official also said that coaches can be hired from Railways or manufactured/procured abroad.
The private firms will decide about the stoppages at stations and the number of stops. It is expected that the speed of private trains would be higher than the regular ones.