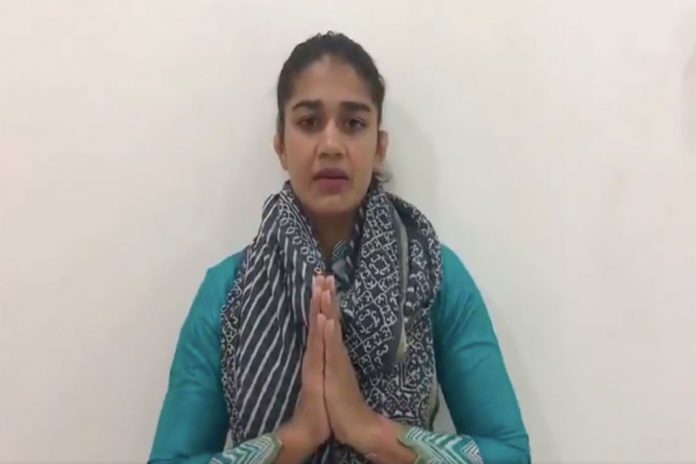 Champion wrestler and BJP leader Babita Phogat a new controversy remarks on social media against the Islamic sect – Tablighi Jamaat – that held a congregation in Delhi last month setting off India’s biggest cluster of coronavirus cases. “I stand by my tweets, I wrote nothing wrong,”

Wrestler Babita Phogat became familiar in every household after the success of Aamir Khan’s Dangal. This film had inspirations from the wrestler’s life.

The star wrestler, who is married now, is back in news again but it’s not for an agreeable reason. She had tweeted that irked a section of netizens due to some communal shades, earlier this month. It was regarding news with the spread of coronavirus. She had to face a lot of criticism after her tweet. She has posted a new video now and it  is connected with Zaira Wasim.

She posted the video after getting bashed on social media for a tweet provoking communal hatred. Babita Phogat posted a message for all the criticizers. While posting a message, she mentioned Zaira Wasim’s incident. Zaira Wasim quit her acting career after she was criticized by netizens and few had attached some religious matter to it.

After getting bashed on social media for a tweet provoking communal hatred, Babita Phogat has a message for all the criticizers.

babita phogat a new controversy  started after she made a tweet which referred to an incident which happened in Indore. A group of frustrated and annoyed locals had attacked the healthcare workers and civic officials physically. This incident happened  because those healthcare workers were there to test the residents of that area for COVID-19.

Babita tweeted, “At your place it might have spread through bats, in India, it spread through illiterate pigs,” and attached the hashtag #NizamuddinIdiots to her post.