YS Sharmila Likely to form a New Party in Telangana 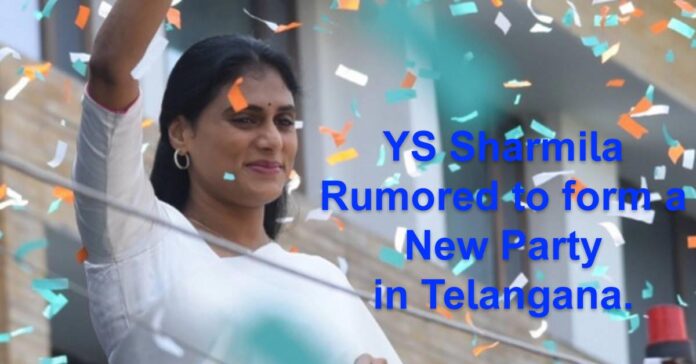 YS Sharmila likely to form a new party in Telangana. Sharmila’s big meeting has started which has rocked both the states. She landed in Hyderabad early in the morning from Bangalore and came straight to Lotus Pond.

She arrived at Lotus Pond several days later and was given a solid welcome by the fans. There was a noisy atmosphere all over the area with huge crowds of fans.

When she was asked about her motive behind her visit, she said that she wanted to the ground reality in Telangana, hence arranged for a few meetings with her father YSR’s friends. Sharmila said that there was no Rajanna kingdom in Telangana and the deficit without YSR was evident.

She said that she expects to bring back the good old days of her father. She said that she was planning to meet every district leader in Nalgonda. It is also said that Sharmila has applied to the Election Commission in the name of Telangana party.

Sajjala a YSR spokesman clarified the news that were no differences between CM Jagan and his sister Sharmila. Sajjana said that Rajasekhara Reddy’s daughter Sharmila always though differently and that’s why she was planning to form a party in Telangana.

Unfortunately, political analysts do not think the same. They expressed that the rumor’s of YS sharmila new party being formed is only a new strategy of BJP. The formation of a new party is only to divide the votes of TRS in the upcoming elections and then merge themselves with the new party.

BJP knows that they will not be able to win against TRS in the rural areas hence they have come up with this new strategy.

A fire accident at chemical factory near Sangareddy district

On Sunday, three workers were killed in a fire accident at chemical factory of Mylan Chemical Industry in Jinnaram industrial area...
News

Contract employees of the Hyderabad Metro rail reportedly called for a protest in order to demand a...
News

The 82nd All-India Industrial Exhibition, known as Numaish, is back with flawless arrangements in Hyderabad from Jan...
Education

Hyderabad: Rajiv Gandhi International Airport (RGIA) has been named one of the most punctual airports in the...
News

Telangana leads in country with 19 medical seats per lakh population

Telangana leads the country with 19 medical seats per one lakh population. According to health minister T...
News

In the middle of a surge in Covid cases of a new variant in China and other...
Load more