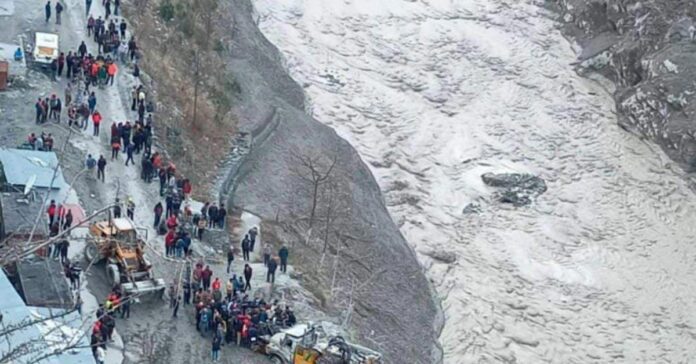 Uttarakhand floods: The guard said that as soon as the sound of the roaring glacier, he alerted the people by whistling. He intimated the people at the bottom that there was an inundation from above, due to which many people immediately reached a safe place.

In Chamoli, Uttarakhand, the mission of saving lives continues after the havoc of nature. Rescue teams have been opening the second tunnel since morning. 19 bodies have been removed from the debris, so far.

At the same time, the rescue teams have saved 15 lives till now. 12 people were rescued from the first tunnel and rescue operations are going on in the second tunnel.

According to Uttarakhand Police, 202 people are still missing in the disaster. The rescue teams have reached 100 meters in the tunnel. This devastation caused damage to Glacier in Raini village of Uttarakhand.

The scenes of destruction in Raini village is heart rending. Two power projects are erased. However, compared to the devastation that has taken place, there is no news of major casualties.

There is a lot of discussion about the intelligence of the guard of a power project in Rani village. In fact, on hearing the sound of the glacier breaking, the guard sounded a whistle and alerted the workers and the people of the village were alerted.

The guard said that as soon as he heard the sound of the glacier breaking, he had alerted the people by whistling, told the people below that there was a swell from above. Many people reached a safer place immediately. Though the whistle of the guard saved many casualties, 202 people are still missing.

Let me tell you that where there were two power projects in Rainei, there is now only a lot of debris. Everything was destroyed Nothing is known of the 32 people working in the Raini Power Project.

The sage Ganga Power Project suffered the most damage by uttarakhand floods. 121 people were working from here, nobody is aware of anything. All were washed away.

At least 40 people have killed and many others have gone missing in flash floods in northern...
Governance

The Director General of Health confirmed that 31 people died in last 12 days in the Char...
Governance

Due to heavy rainfall, there were flash floods in several parts of Himachal Pradesh, Uttarakhand and Jammu...
Health

In a recent development, The Haridwar district administration ordered an investigation. It alleged that fake COVID-19 test...
News

Twenty-year-old Shrishti Goswami who took over the charge of Uttarakhand CM for one day on Sunday gave...