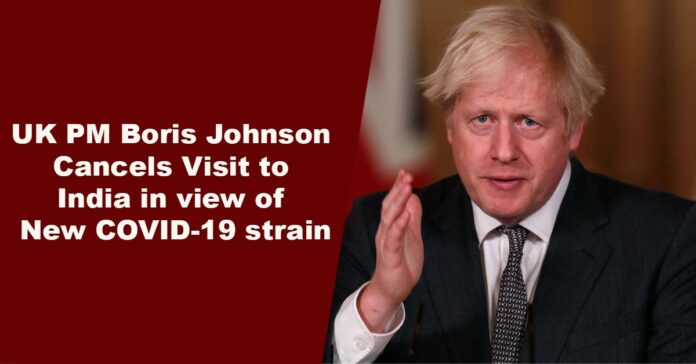 UK PM Boris Johnson cancels his visit to India, soon after he announced a fresh lock down in the United Kingdom over the new strain of coronavirus. Mr Johnson was invited to be the chief guest at this year’s Republic Day parade in New Delhi, for which he had consented earlier.

According to the statement from UK PM Boris Johnson’s office, “in the light of the national lockdown announced last night, and the speed at which the new coronavirus variant is spreading, the Prime Minister said that it was important for him to remain in the UK”.

A statement from his Downing Street office read, “The prime minister spoke to Prime Minister (Narendra) Modi this morning, to express his regret that he will be unable to visit India later this month as planned,”

“In light of the national lock down announced last night, and the speed at which the new coronavirus variant is spreading, the Prime Minister said that it was important for him to remain in the UK so he can focus on the domestic response to the virus,” the statement read.

“The leaders underlined their shared commitment to the bilateral relationship, and to continuing to build on the close collaboration between our countries — including in response to the pandemic,” it added.

Mr Johnson would have been the second British Prime Minister to attend the Republic Day parade as the Chief Guest, as John Major being the first in 1993.

Mr Johnson’s government has announced a complete lock down for England’s 56 million people, which could last until mid-February.

The measures were taken amid a huge spurt in corona virus cases which saw 80,000 fresh infections on one day in the end of December. If unchecked, the National Health Service will be overwhelmed, Mr Johnson had said while making the lock down announcement, which came into effect on Monday night.

“The Prime Minister said that he hopes to be able to visit India in the first half of 2021, and ahead of the UK’s G7 Summit that Prime Minister Modi is due to attend as a guest,” his office said.

ALSO READ: How is Dry run different from Vaccination?